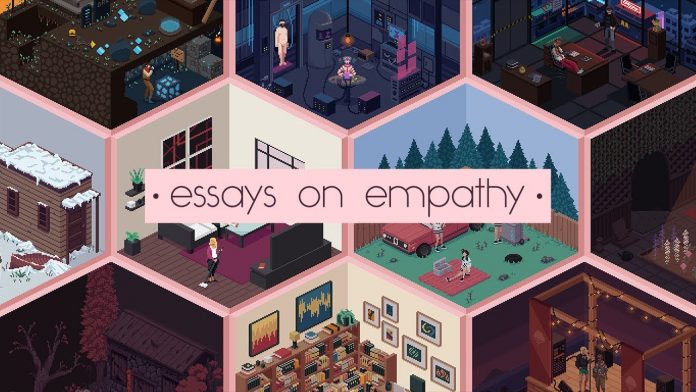 A short video game has made me analyze the way I behave in relationships.

While I consider myself to be a supportive and loving partner, I am not perfect, and have definitely done my fair share of emotional damage to people, just as I too have received my fair share of damage as well.

Like a lot of people in abusive relationships, I came from an abusive upbringing. Numerous issues from my childhood carried into my adult life. In fact, I would say all my childhood issues have probably gotten worse in my adult life. Thankfully, I have always been one to talk about my feelings, as well as seek self-improvement and education that can help with my mental health struggles.

I never thought a video game would make me realize hard facts about myself.  Or that I would find solace in the fact that it did. That a combination of text, pixel-art and music would have me well up with tears, come to terms with my previous and current mistakes, and that ultimately, a video game would improve my life so directly, and so quickly.

There are 10 experiences in total, each with a gallery showing off various stages of the game from concept to completion, as well as videos where Deconstructeam discuss the games in detail. While these are extra bits are a treat for a content creator such as myself, I feel they could be of immense benefit to indie developers, as they offer insight into exploring narrative, game design concepts, and more.

At first glance, each of the games bare a resemblance to each other in some form. Scratch beneath the surface, though, and you will see that each of these games couldn’t be more different from the other. It isn’t just the gameplay either, Deconstructeam clearly have a knack and passion for exploring narrative. Some of these games present realistic storytelling, others more fantastical. Some offer players a unique, short experience than traditional games, others prove to be ultra-realistic in their storytelling, and cover subjects most developers wouldn’t touch.

At this point I will say that there is a myriad of themes present in the Essays on Empathy collection, some of which may make people uncomfortable. Everything from sexuality, morality, abusive relationships, and self-harm is explored, as is storytelling itself.

Underground Hangovers is the first game I played. A metroidvania where off-planet miners have been left behind, players are tasked with gathering enough ore to build a spacecraft and escape the planet’s gravitational pull. I found the game’s gameplay and art style to be charming, though it did not ultimately hook me.

I tried Supercontinent Ltd next and found myself unable to progress from the very start of the game. I am almost certain I encountered a small bug that was keeping me from moving forward, but I’m unsure. At this point, I wasn’t sure if I would get anything out of Essays on Empathy. Until I played Behind Every Great One and 11.45 A Vivid Life…

11.45 A Vivid Life tells the story of Laynie, a girl who is on the run and in possession of an X-Ray machine. Laynie believes that her skeleton isn’t her skeleton, but a foreign entity inserted into her body. As wild as this sounds, Laynie is stumbling onto something.

The narrative can resolve itself in a number of ways, all based entirely on the choices you make. The first choice in a set of three usually leads down a path of exploring PTSD and abuse. The middle path to exploring paranoia and (to a degree) sci-fi. What makes this experience work is that it is short, and therefore able to branch out into numerous paths without over-complicating things. I don’t recall a time where a video game had me remove parts of my body and explore my body as heavy part of the narrative, and in 11.45 A Vivid Life’s case it is the sole focus of the narrative. I left this experience feeling a sense of satisfaction I have not felt in a long time with games.

Now, onto Behind Every Great One. For such a small experience I have so much to say about it, but for the sake of this writing I will try my best to be succinct.

Warning. From here on I will be discussing abusive relationships and similar topics.

Behind Every Great One

In this experience, players are cast as Victorine, wife to successful artist Gabriel. Victorine doesn’t have any hobbies or a job, but she loves Gabriel and is supportive of him. Gabriel is hard-working, to the point that he is obsessed with his work, not helping around the house. Players will fill their days tending to the house, talking to Gabriel, as well as dealing with family dropping in unexpectedly.

It might not sound like much, but this has been one of the most gut-wrenching experiences I have played in recent memory. I relate to both characters, and truly empathize with Victorine in her plight. The dialogue is written so realistically that I actually found it upsetting. Gabriel tries to be nice to his wife, but at the same time is verbally abusive. Victorine isn’t allowed in his studio, and even when he isn’t outright hostile, his compliments are backhanded, and he is manipulative.

There is no way to “win” in Behind Every Great One. There isn’t enough time in the day to get everything done, and Gabriel always makes players feel as though they have let him down. Choose to water the plants, do the dishes and iron a shirt, but fail to cook? Gabriel will let you know. “I was looking forward to a nice meal with you after working so hard”. See, he isn’t outright hostile, but comments like that erode Victorine’s self-esteem and her sense of purpose. If she cannot even keep her house tidy and her husband fed, what purpose does her life even have?

Gabriel frequently asks Victorine for sex, and when refused, will ask for sexual gratification in another way. When refused again, he goes to bed without saying “I love you” to Victorine. He recognizes that Victorine lives only for him and he takes advantage of it. It only gets worse when his parents arrive. I actually found myself upset that I gave into his requests at certain points.

During difficult conversations and moments of hopelessness, the camera slightly tilts and/or zooms out, giving a feeling of alienation, nausea, and isolation. In many ways, Victorine is a prisoner in her home. There are times where she has no option but to cry in a vacant room. If you are a player who attempts to get into the minds and experiences of video game characters, this is truly heart-breaking to play.

I won’t go into too much more detail with Behind Every Great One, or Essays in Empathy. I fervently believe that Behind Every Great One needs to be experienced by as many people as possible, but only if they are comfortable exploring uncomfortable and potentially disturbing scenes. I will say this: I identified problematic behaviours of my own during my time with the game, which I confided to my partner about. I needed a palette cleanser, and played some light-hearted games afterwards. Powerful stuff, for those who are interested.