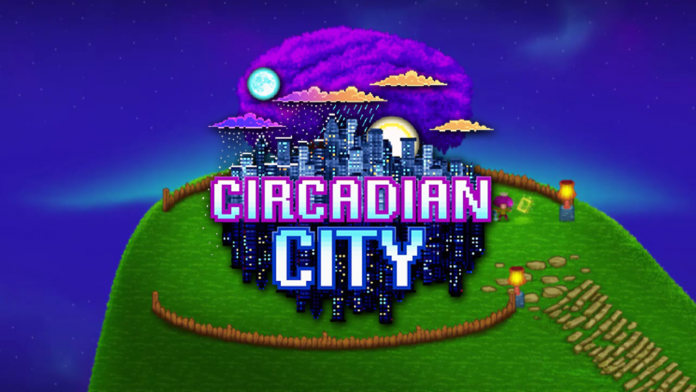 Imagine that the world we experience while we are awake and the one we experience when we dream have a unique bond. That one can influence the other, and that you could lucid dream so frequently to the point where you are living two lives. That’s the premise of ‘Circadian City’ from Nowhere Studios & Way Down Deep, a game where you work a normal job and have a normal life while you are awake, and in your dreams are cultivating and navigating your own dreamscape.

To be honest, that is a fairly reductive explanation, as to play Circadian City is to play a truly unique game – for better and for worse. Recently released into Early Access on Steam, this is far from a complete game, though it’s easy to see the game’s potential and charm.

Like a lot of games, Circadian City begins with creating your character. I appreciate that you can select male, female, or other, though the customisation options are extremely limited. You have a handful of faces, colour options, and a single shirt and pants. For the record, I hate wearing normal collared shirts, but this game forced me too.

After creating your character, you’re dropped into the game. Beginning a new job in a new city, you’re awaiting a train to take you there at the local train station. Your mum gives you a phone call, explaining that if you need help, your father’s friend, Mr Chicory, is the stationmaster. She wishes you luck, tells you she’s proud of you and that she loves you.

Meeting Mr Chicory serves as a sort of tutorial, in that he teaches you a few of the game’s mechanics. He asks you to help him retrieve some lost luggage, and then to fix its handles as they somehow broke. He also asks you to make him an omelette, and informs you that you can make yourself one too. It’s honestly an odd interaction, but one that paves the way for a lot of the game’s dialogue.

Once you familiarise yourself with some crafting, it’s time to get the train to your new home. The train sequence is oddly endearing, with some rather basic but charming visuals. People in the city seem unique, and happy, sipping lattes through twirly handlebar moustaches, interacting with each other with smiles on their faces. It looked blurry and stretched on my 4K monitor, but was still very engaging.

To the Big City!

You arrive at the front of your new home. Inside is a doorman that you’re able to talk to. Interacting with people in Circadian City can be related to quests, but also completely voluntarily. Voluntary conversations with people improves your mood, and sometimes offers rewards such as tips or recipes. You can interact with everyone you see, from your boss and co-workers, to baristas, bartenders, hotdog vendors and more.

Once you travel to your new job, you’ll meet your boss and co-workers. Once you get past interactions, you won’t interact with these people much, unless it’s to casually chat voluntarily. You’re told that as long as you do some work every day, you’re free to come and go as you please from your office cubicle, and are paid instantly – what a deal!

I chose to work for 2 hours on my first day, and wander the city briefly. I purchased a latte, introduced myself to several people (some are absolute weirdos!) and returned home, cooking myself an omelette, and going to sleep. You are prompted to select how long you sleep for, so, feeling rather ambitious, I chose ten hours sleep.

Terry Gilliam Would be Proud

I awoke in my dreams, under a giant, purple-leafed tree, accompanied by my favourite childhood toy, Rob-rob (who oddly resembles Bob Ross). The sky is a beautiful and surreal purple, a giant hill sits under the tree, with some sort of bizarre, giant monster…thing sleeping under the hill.

Rob-rob explains to you that you used to come here all the time when you were younger, though you don’t remember anything. He further guides you through some of the game’s tutorial elements, though there are times where things aren’t made clear enough. I didn’t know quite what to do at times, and characters present offer no help.

Still, I managed to learn a few crafting recipes for my time in my dreams, and return to my awake life. Rob-rob told me that improving my normal life will aid me in my dreams, and vice versa. I chose to enrol in a course to learn coding, something I’d actually like to learn in real-life as well. Unfortunately, there isn’t much to learning in Circadian City, you simply buy some course time, and click on a door behind the counter in the lobby. Time passes, and I guess you have learnt some coding.

Summarising my time playing Circadian City in Early Access is difficult. One one hand, I absolutely love the premise and unusual art style. On the other hand, the game definitely needs a lot more work before it is even remotely close to being finished. It feels a lot more bare than other Early Access titles, and there were quite a few odd choices and bugs present. The night sky in the dream world doesn’t go past a certain resolution, so I looked as though there was a black wallpaper with a small, envelope sized night sky on top of it. Typos and nonsensical writing also plague the game’s dialogue, making it difficult to actually take in some of the conversations. The city also feels incredibly empty, and while I’m sure there will be people populating the various areas in due time, right now it feels as though 6 people total live in the city.

Despite all this niggling annoyances Circadian City proves itself to be a title to keep an eye on. The idea is brilliant and I’m sure that with enough development, we will see a must-play game eventuate – especially if awake-time gameplay is expanded. Feel free to check out my livestream of the first hour below.