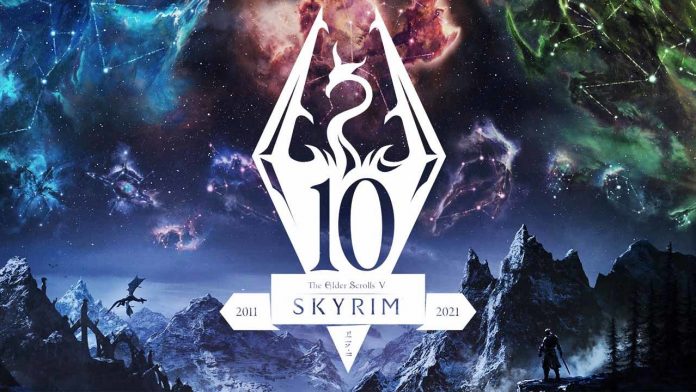 It’s the 9th of December, 2021. In this day and age, there are a staggering amount of games that I’m interested in releasing rapid-fire around the clock. Choosing the path of a content creator and games journalist is a foolish one, as it’s a sure-fire way to fall behind on games you want to play versus games you have to play.

Thankfully, I get to go home for a game that I both want to play and have to play. The only problem is, I can’t stop. Help me, I’m addicted to The Elder Scrolls V: Skyrim all over again!

No, not quite. Skyrim is back in the headlines because it received a free update for its 10th anniversary. The game has actually been released a total of 15 times on 10 different platforms, to the point where there were jokes and memes, as well as Bethesda themselves embraced the humour themselves. There are good reasons for the game sticking around for so long though.

I remember my experience of the original Skyrim release so well. I was living in a creepy and haunted 10-bedroom ex-convent with 4 other geeks, and the rent was so low that we could each afford to study and spend too much money on video games. We all had the latest consoles, and each of us had pre-ordered Skyrim. Some of us were going in blind, and a few of us had completed The Elder Scrolls IV: Oblivion. I was the only one who had played Morrowind.

Upon Skyrim’s release, countless people across the world went missing. They weren’t abducted, but the game was the first major instance of people either calling in sick or taking annual leave en masse. Now, game companies will have post phony doctor’s letters on their social media for people to print off, the joke being their game is going to be as addicting and lauded as Skyrim. They wish.

My roomies and I all took time off work. A whole week, eating pizza, burritos and God knows what else. We set up the convent’s massive entertainment area as a LAN space of sorts, and invited one of our best mates to stay with us. Then, on the 11th of November, 2011 (11.11.11 – Skyrim day) we began our collective journey.

On launch day, we began Skyrim’s main quest. Then, as the dragon freed us from the clutches of the Imperials, we each escaped to Riverwood. After that though, each member of the LAN chose a different direction to travel in, reporting on anything we thought was interesting while sworn to keep any potential spoilers secret. Only one thing was for certain, one week off work wasn’t enough.

Skyrim had more of what made the Elder Scrolls great than any other Elder Scrolls game. Sure, it also lost a lot of its originality compared to earlier titles like Morrowind, but it also had more voice actors, a more robust and detailed world, more unique quests, and an incredible atmosphere. It stood the test of time and has remained one of the highest rated video games of all time. Not only that, but it has remained part of the video game discussion since it launched. Think about it, we have been talking about Skyrim for 10 years.

How has my Anniversary experience been?

Honestly, playing the Anniversary update has been fantastic. Skyrim has become my daily go-to game (the same as the original release) and it has been a sheer joy to relive the adventure all over again. I’ve been both a werewolf and a vampire, a master thief, an expert marksman, a deadly mage and a fierce warrior. I’ve defeated dragons, gotten married to an intimidating shieldmaiden, climbed High Hrothgar, become an awesome blacksmith and much, much more.

Visually, Skyrim’s original release was absolutely gorgeous for the time, and thanks to a number of texture upgraded, additional effects, and HDR support, the game is plenty gorgeous today. I often find myself getting distracted by Skyrim’s visuals, whether it’s beams of light illuminating an otherwise dark and foreboding cave, the aurora borealis above my homestead in the Pale, mysterious fog obfuscating my way through a Dwarven ruin, or just the way the characters and locations look on systems and consoles today.

The Legacy of Skyrim

It’s funny how I remembered so much about Skyrim from its original release, but also forgot so much about it as well. This is a game with a truly vast amount of content. There is a mainline quest, faction-related quests, small side-quests and encounters, and you’re able to be entertained simply by wandering and exploring. Thanks to the support of mods on both PC and consoles, you’re also able to play original quests made by the Skyrim community, tweak things to your desire, or even download a faithful corgi or MMA legend Robert Whittaker as a companion. Some of the aforementioned fan-developed quests have even landed their creators careers as actual game developers.

I’m thankful I’m still able to play Skyrim on modern PCs and consoles, and that the game still holds up after all this time. I would love to see other games get this same treatment from their developers and publishers, though this of course is dependant on a number of factors. The recent Secret of Mana remake, for example, was ineptly developed, and therefore, poorly received. Meanwhile Square Enix’s Final Fantasy VII remake looks and plays amazingly. Would we have gotten the FFVII remake if not for Skyrim? It’s an interesting thought…

Let’s not forget that Bethesda embraced the gaming community as much as the community embraced their games. We haven’t really seen a relationship between fans and developer/publishers quite like this before. One where a game establishes itself as one of the greatest of all time instantaneously, debuting with an amazing foundation that would later be expanded upon and polished to near-perfection. Where fans, content creators, and budding modders would all have a chance to share their creations with each other, and also with the very people who created the game they love so much.

Now, not only do we look to the future for The Elder Scrolls VI, but we also look to space for Starfield, Bethesda’s first original RPG in over 25 years. It must be an intimidating time for Bethesda, though I’m certain they’re up for the challenge. I also can’t wait to see how the gaming community reacts to these future titles.