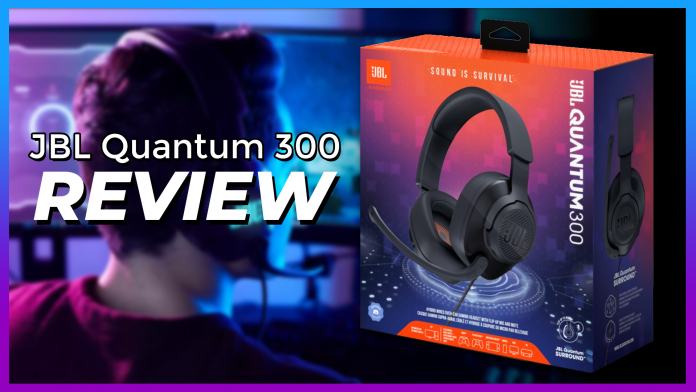 Sometimes, I instantaneously know how I feel about a game or a piece of kit. They are so simple to use, and the quality is immediately apparent, that I welcome them with open arms. As you’ve no doubt seen from my previous articles and videos, I use a variety of brands and products to suit my various purposes. I’m fairly well-versed when it comes to gaming headsets in particular and have tried out a number of headsets from manufacturers such as Plantronics, Logitech, Corsair, Audio Technica, Stealth, Turtle Beach, and more.

For quite a while, my everyday gaming headset was the JBL Quantum 100. I reviewed it here, calling it “the best headset under $100” and I stand by that. Lately. I’m taking the time to “level up” my gaming and content setup. I’ve ordered a stellar new PC, I’ve got a new microphone, a new Panasonic mirrorless DSLR camera, as well as current gen consoles. When JBL reached out to me to see if I was interested in trying out a louder, more precise gaming headset, I jumped at the chance. Let’s check out the specs.

“Across each of my consoles, the Quantum 300 delivered what I expected: high-quality surround sound, powerful bass, and decent treble.”

The JBL Quantum 300 (much like the rest of the Quantum range) arrived in an eye-catching box. JBL’s orange to violet-blue gradient never fails to make a statement, as does the large product shot of the 300 on the front of the packaging.

The box also lists various features of the headset, including the compatibility with JBL QuantumENGINE, the inclusion of a USB Audio Adapter, and the flip-up microphone. It also lists the types of compatible devices, which are: PC, Xbox, PlayStation, Nintendo Switch, Mobile, Mac and VR. As I’ve said before “if it’s got a 3.5mm headphone jack, you’re on!”

Just a quick note: the back of the box gives a rundown of the features in non-English languages, which is super handy.

Outside of the box, the Quantum 300 appears to be a simple headset, but appearances can be deceiving. JBL’s signature orange features on the braided audio cable, the base of the 3.5mm audio jack, as well as inside the earcups, with large letters indicating which earcup is for which ear. It might sound silly, but when you need to get in the game quickly, the giant “R” and “L” are surprisingly handy.

The rest of the headset is entirely black – perfect for a stealth mission. The ear cups are large, and shaped in a way to fit over your ears – unlike other headsets that have a perfectly circular cup. This comes down to personal preference based on your own ears, obviously, but for me, the Quantum 300 is a comfy piece of kit. Not an easy feat.

I’ve been using the JBL Quantum 300 for the past few weeks, wearing them while I edit videos, listen to music, and play games on Xbox Series X, PS5, Switch, and PC. On PS5, Deathloop was atmospheric. On Xbox Series X, I lost myself in the cute, simplistic charm of YouTuber’s Life 2, burnt tiny rubber in Hot Wheels Unleashed, and explored Russia’s Exclusion Zone in Chernobylite.

The headset is also lightweight and flexible. In my part of Australia we’re moving into a warm spring, which means that on a warm day, my ears tend to get a little warm on longer gaming sessions. This is bound to happen based on my geographical location, but also because of the leatherette ear cups on the Quantum 300. There are some mesh earcups on rival headsets, but with these you sacrifice sound isolation and therefore, immersion. It’s a minor issue, but still something to consider.

Across each of my consoles, the Quantum 300 delivered what I expected: high-quality surround sound, powerful bass, and decent treble. It wasn’t until I downloaded, installed and ran JBL’s QuantumENGINE software, that the headset reached its potential – and I feel at that moment, I too reached my potential…

You might have seen my video on Embody’s Immerse software, which offers audiophile’s personalised spatial audio. Spatial audio (when done right) is an absolute game-changer, and with 75 years in audio engineering, you bet JBL aren’t going to develop their own spatial audio if they without bringing their A-game. In my experience, QuantumENGINE has been on-par with Immerse in terms of accuracy and clarity.

I want to reiterate at this point that using the JBL Quantum 300 on consoles has been a positive experience. It’s crisp, it’s accurate, it’s a terrific addition to your gaming setup. When you use it with QuantumENGINE though, it’s another beast entirely. It’s smart. It’s elevated. It’s sound with a brain.

You may remember that I reviewed the JBL Quantum 100 a few months back. It’s a terrific headset for $100, and perfect entry-level kit for someone wanting to pick up their first gaming headset. The Quantum 300 steps things up in a few departments, though. Here’s a direct comparison:

While sharing a lot of the same features, the JBL Quantum 300 has bigger drivers, meaning more powerful sound, especially bass. It also weights a little more than the 100, but still falls into the same average weight of the majority of gaming headsets on the market.

It’s also louder than the Quantum 100, thanks to its sound pressure level. It also has a more sensitive microphone and is able to handle sound just that little bit louder, not that I recommend screaming into your mic while gaming – always practice good netiquette, kids!

The JBL Quantum 300 is terrific headset, especially when partnered with JBL Quantum ENGINE on the PC. The bass is powerful, the treble crisp, and it’s comfortable enough to wear for long gaming sessions. It’s compatible with a huge amount of devices, so it’s perfect for consoles, mobile and PC gaming. The flip-up mutable mic also means you’re back in the game quicker after life’s interruptions. A stellar piece of kit.