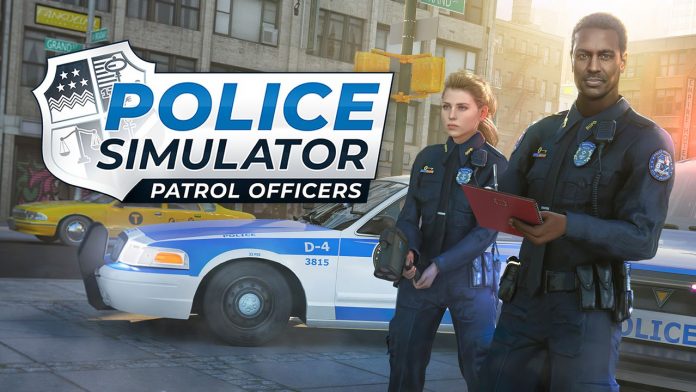 I’ve been burnt by a multitude of “simulator” games in the past, as many failed to hook me with whatever angle they approached their concepts from. Usually, these take on one of two forms: A. being a sincere and earnest recreation of something or B. being an over-the-top, bonkers goof fest with a thin veneer of being a simulation. Sometimes the latter can be a riot, like Goat Simulator, and sometimes a sincere attempt at a sim can be tedious and downright awful, like Bee Simulator and Professional Farming Simulator 2017.

My point is the simulator gaming scene is a complete mixed bag and I’m not exactly champing at the bit to jump into any of them blindly.

I was asked to review ‘Police Simulator: Patrol Officers,’ which is approaching its full release on Steam. To be honest, I had no expectations of the game. I was open to being pleasantly surprised by it but didn’t think it looked like anything spectacular. Fast forward to now, having played it for the last week, I love it, and I’m definitely excited for its future. Here’s why.

A Different Approach to Police Games of the Past

The concept of playing as a police officer is nothing new to games. Even as far back as the late 1980’s with games like Police Quest, gamers have been doing their best to withhold the law within the confines of a virtual environment. I have played a bunch of them, and while some of them have earnestly tried to depict the occupation of police officer, most boil down to adrenaline fuelled power fantasies or Hollywood level exaggerated narratives like Battlefield: Hardline.

Police Simulator: Patrol Officers is different, taking a very detail-oriented approach to the experience. There are no helicopter pursuits through a burning city, no jumping from car to car in a high-speed pursuit on an endless highway while firing a limitless number of bullets – just real police work. Because of this, the game is engrossing, and I would argue, more rewarding.

Fresh Out of the Academy

You’ll then choose a region to go on patrol in. You’ll start off with only one, but as you progress, you’ll unlock more areas (with more activities too). Upon arriving at your destination, you’ll find yourself behind a desk in that precinct’s police station, with a primary duty to complete. As a complete rookie, you’ll be handing out traffic tickets. I chuckled when I first saw I’d be on parking duty, but thanks to the detailed approach to the game, found myself getting excited when I found someone violating the law, so I could get my pad out and slip them a citation.

Players can focus on people, the environment, cars, and more. The camera will zoom in, and players will collect information on the object of their focus. With traffic tickets, it’s important to notice if a car is parked facing the wrong way, on the sidewalk, to close to a crosswalk, in a no parking zone, and more. Thankfully, you’ve got your police handbook that features laws for a number of situations.

I was hesitant at first to truly dive into being a traffic cop. If you fail to deliver infringements to the letter, you will be penalised, losing reputation as a police officer. You can’t tow someone’s vehicle if it isn’t posing as a potential danger (parking a foot up on the sidewalk isn’t blocking an emergency vehicle, for example) and doing so will see you reprimanded. The game also slowed down with doling out tutorials that were basically “gimmes” as well. When it came down to trusting my gut, I was nervous. Thankfully, with a little trial and error, I became well versed in traffic violations, and towed vehicles that deserved it – my apologies to the vehicle with the disabled permit that I wrote up for parking in a no-parking zone!

Traffic duty serves as the perfect activity for players to become accustomed to Police Simulator’s core gameplay. Exploring on foot, interacting with civilians, focusing on vital details, delivering citations. There were a few times where I saw dangerous driving incidents and I wasn’t able to pull vehicle over, but you do unlock this ability within a few patrols. I personally was ready to go full Judge Dredd, but I couldn’t just yet.

As you complete more duties, you’ll begin to feel like a fully fledged patrolman. You’ll unlock a gun, sign to pull people over, radar gun, and even your own patrol vehicle. You’ll be able to pursue suspects of interest, investigate crash sites, search suspicious individuals, and more.

After a few hours with the game, I was loving it. There’s a real thrill to nailing the job, and a real sense of regret when you fail to rise to the occasion. Take my first crash investigation, for example. I responded to a call of two cars colliding. When I arrived both drivers were out of their cars. I asked both for their IDs, tested both for alcohol and drugs, frisked both people, then sent them on their way as no one was hurt, and no one was under the influence. My crash report was worthless, and the drivers let me know this.

A few crash scenes later, and I am much more thorough. Using my camera, I take photos of the damage to both vehicles. I ask witnesses nearby what they saw, I ask the drivers what their accounts of the events were, I test both drivers to ascertain if they were under the influence, and ultimately, I make a series of correct calls based on evidence. I found one driver under the influence of meth, which then allowed mt to search them, finding concealed weapons. The tyre skids from the crash scene also indicate they themselves were responsible for the crash. I arrested them for concealed weapons and driving under the influence, at which point, they tried to run! They didn’t get far, as I pulled my taser out, ordering them to stop. I detained them until backup arrived, taking them into custody. I towed their vehicle, dispersed the crash scene, and was back on the road in my trusty patrol vehicle.

Though I am merely reciting a series of events that might sound mundane to some readers, believe me when I say I legitimately got a rush from that crash scene. Not one bit of evidence escaped me, I trusted my gut and searched the nervous driver. I drew my weapon but didn’t fire. I was a damn good cop.

Now, Police Sim isn’t a perfect game, and there are plenty of areas in need of polish. For one thing, the environments themselves can come across as sterile. Everything is just that little bit bland, and you’re only able to explore the streets, and not any building interiors themselves. The civilians wandering the streets aren’t just bland, they are at times, downright awful to look at. I was actually reminded of some of the worst characters in The Elder Scrolls IV: Oblivion. Some civilians are strange amalgamations of various features, looking like overly smooth department store mannequins awkwardly brought to life.

Then there’s the current version of the game’s repetition. While I find crash scenes interesting for now, there’s only so long I can go through each motion without the game needing something more spontaneous thrown into the mix. Someone to pull a gun on me, or get in their car and attempt to escape the scene – something like that. Eventually, the game’s processes will become second knowledge to me and it won’t be about doing the best job I can, but about the quantity of tickets I can hand on a single shift.

More features are coming Police Simulator: Patrol Stories, however. Multiplayer is almost here and it could only prove to be a riot. Imagine one person driving while the other pulls over suspicious vehicles, or coming together with one person on foot in pursuit of a suspect, guiding them to their partner who is waiting by the patrol car to arrest them. What about two players driving in pursuit of a suspect, with one player shooting out the suspect’s tires? There are so many possibilities.

While I don’t like to commit to a game hoping it realizes its full potential, I don’t mind with Police Simulator, because the game is great right now (with the exception of those damn character models) and can only get better.

Police Simulator: Patrol Stories’ strengths trumps its weaknesses as the game proves itself to be a highly entertaining representation of the beat cop life. While there is a lot to learn, the game is well paced and intuitive, meaning anyone can live out their police fantasy. Definitely worth its asking price, so don’t hesitate to pick it up if you’re curious about it.