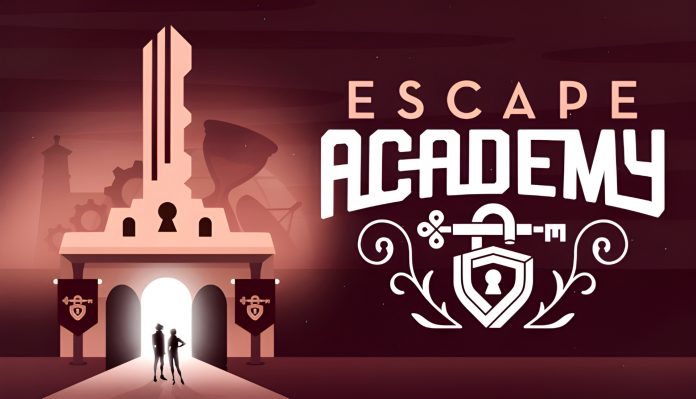 Escape rooms are undeniably part of popular culture, with countless locations being set up across the globe, horror movies based on them, and now, video games. As someone who was admittedly carried through my first real-life escape room, I love the idea of escape rooms and am excited to see this become a new subgenre in gaming.

‘Escape Academy’ takes escape rooms, wraps a charming narrative around them, and allows players to experience more simulated danger than any real-life escape room could possibly offer – so how is it?

Escape Academy’s story begins with an understated brilliance. Players are participating in an escape room in their local town, which accurately depicts the cheaper escape rooms one might encounter. The escape room, however, holds a secret. It is in fact, a means of recruitment for the secret Escape Academy, a school that nurtures would-be escapists into becoming adept escape artists. After solving the simple escape puzzles, you are met by the Escape Academy’s headmaster, who offers you the chance to put your skills to the test at the academy. Naturally, you accept, and board a train to the academy.

The game features a number of characters. There’s Jeb, the fun-loving groundskeeper, Professor Slip, the barely-present graffiti enthusiast, Professor Quanty, an advanced AI, Professor Bonilla, the botany-loving bomb expert, Professor Eel, a legend in need of rescuing, Gillian, a priveleged student, and of course, the headmaster herself.

For the most part, the characters aren’t all that present in the story. Rather, they introduce various escape rooms to the player, and allow the rooms to have various themes. Jeb’s absentmindedness creates an instance where a room is flooded and can potentially drown the player, Bonilla’s love of botany sees the player locked in a greenhouse researching various plants, Slip’s love of graffiti sees players getting rebellious in the arts department. Seeing as the focus can and should be on the escape rooms themselves, the characters serve their purpose adequately.

Progressing through the various escape rooms sees the player uncover a mystery behind the Escape Academy and its senior staff. As the game overall can be quite short (I spent just under 10 hours completing it to 1000 gamerscore myself) I won’t reveal any spoilers but I will say that the story hardly offers any surprises. It treads familiar ground and tries to bamboozle the player, but as we’ve only known these characters for a brief time it fails to have any impact. I’m glad that there is a sequel or season pass on the way (confirmed at the end of the game) but the story twist(s) would have been more effective had we had more time with Escape Academy’s characters.

The Rooms are the Real Stars

Subterfuge and intrigue are all well and good, but it’s the escape rooms themselves that truly shine, thanks to developer Coin Crew Games working with actual escape room experts. With my IRL escape room experience, I have found that some solutions to puzzles can be convultued to the point of being nonsensical. Thankfully, Escape Academy’s rooms all feel balanced and increase in difficulty perfectly. The developer’s goal should be to challenge the player and make them feel rewarded for solving particuilarly difficult puzzles, and that’s exactly what happened in my playthrough. In fact, I can’t remember the last time I felt this satisfied completing a game.

The rooms are all quite varied in regards to their overall themes as well as the puzzles they include. One puzzle saw me communicating with the headmaster through a radio, while I guided her via surveillance cameras throughout an enemy stronghold. I had to gather clues from within my control room and relay them to her through the radio. Another saw me tested by Professor Quanty with some classic pipe puzzles similar to the classic DOS game Pipe Dream. Nothing ever feels repetitive in Escape Academy which is quite an achievement.

The game can be completed in single player, but I feel it is best to be experienced with a friend in either local or online co-op. During co-op, half the screen shows your friend’s screen, so you can see what they have in front of them as well as what you have in front of you. This enables players to share visual hints and information while working on a puzzle, which is quite an advantage. The single player alternative would probably be to take photos on your phone, screenshots during gameplay, or use a tried and true pen and paper. My only gripe with the muliplayer screen sharing mechanic is that the field of view doesn’t change, and your friend’s screen can be obtrusive at times. I feel that the ability to turn screen viewing on and off would have been better. That way, my friend can prompt me to look at their screen for a visual clue, while I can run around with a full screen for the majority of the game.

I will say that I tried to play the game with a friend on Xbox, and there was an odd latency with controls, meaning that I would not walk, then walk past items completely. I was playing with someone else with an Xbox in the same house as me, so I couldn’t explain the poor connection. I’m not the only person with this experience, as I saw multiple reviews complaining about this and similar issues on the Xbox Store.

Overall, Escape Academy is a terrific title, and while it is obvious a lot of effort has gone into it, some may find that the $29.95 AUD asking price is a little steep for how short it is. Obviously, there should be no hesitation to check the game out on Game Pass should you have a subscription. Both my friend and I loved our experience with it, both feeling challenged and rewarded by it. Highly recommended.