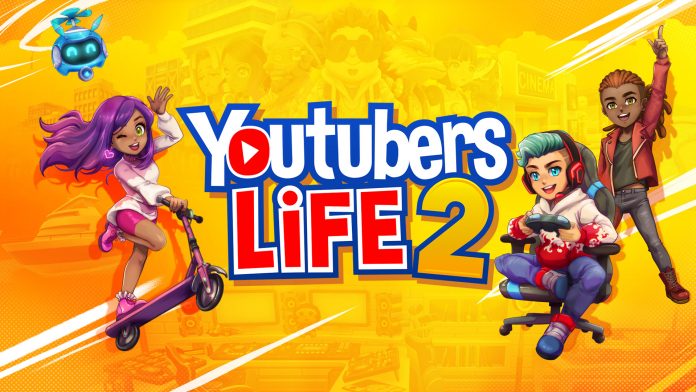 YL2 barely dips it toes into the water with its life-sim elements. You can meet other people, build up relationships, but these ultimately feel hollow.

Sometimes, I can’t explain my attraction or curiosity to a certain game. Perhaps it’s an unusual concept, perhaps the game oozes tons of charm, sometimes it has a unique or retro art style that sways me. In any case, I cannot for the life of me explain why I was drawn to ‘Youtubers Life 2’, a life-sim/sim game from Spanish developer U-Play Online. By all accounts, this looked to be a shallow simulation of the life of a content creator, with some friendship mechanics and quests sprinkled in.

Perhaps it’s because I have a middling YouTube channel myself then, that I chose to dive into this mid-tier title. My expectations are low, but I downloaded YL2 wanting to be surprised. I wanted the game to be my next Animal Crossing or Hokko Life – even if it was only for a few weeks or months.

I took my time with this title (I’ve had it since launch) and if I were to summarise how I feel about it right now, I’d say that it surprisingly holds a great deal of potential, but ultimately feels to repetitive, and lacks the commitment to be either a full-on life-sim, or simulation game. Despite this, though, I have enjoyed my time with the game – it just leaves me wanting more. Before we dive into the full review, feel free to check out my Player 2 Plays here.

The game opens with players sitting at their gaming desk, completing U-Play’s previous entry in the YL series, Youtubers Life. The game, it turns out, was actually designed as a test to see who among its lofty number of players would actually find huge success if given opportunities as a content creator – a sim within a sim. Simception.

Players then move to an entire city dedicated to content creators! Not really, but that’s the spiel. For a city dedicated to content creators, there sure are a lot of non-content folk wandering around. Can you at least interact with them for your videos? Not unless they’re standing at a designated content spot, like the front of the fountain, convention centre, or out the front of the gym. Still, there’s an obvious attempt to breathe life into this otherwise sterile hub world, which would be barebones without the odd pedestrian crossing a road or staring at their unreachable cat stuck in a tree.

Still, this is a city with multiple venues that players can film and post inside and outside. Wanna show the world you’ve just picked up a takeaway ramen or the latest game for your SonnyPlayStudiosOne (yes, that is actually what U-Play named their Sony PlayStation parody)? You’re able to do so with the Instagram-esque photo sharing app. Wanna go live out the front of the gym for some bro science? You can!

The game’s tutorial teaches players the basics of content creation and hosting, as well as other core mechanics. You can create content at any point in the day and stay up pretty late should you choose. Filming content spends energy, run out of energy and you’ll hit the floor, being penalized time and energy the next day.

Creating content is made up of filming and editing. Filming initiates a mini game of choosing your reactions to events taking place during your filming. Your camera might stop working, or run out of batteries, you might be awful at a video game, or you might get a weird or terrific response from someone you’re interviewing. It’s up to you to pick a direction for your content and stick to it. After you become acclimatized to the mini game, however, you’ll simply go with whatever lands you the best score overall.

Editing can be done immediately after filming, or whenever you choose. This could be handy if you’re running low on energy and need to eat or sleep, but I never ran into this being a problem – it just offers options. Editing involves matching shapes, choosing titles and thumbnails, and then choosing a thumbnail image for the upload. At first, this can be tricky, and due to the somewhat random nature of matching the shapes of content blocks, you can have to leave things on the cutting room floor. Thankfully, it isn’t long before players can upgrade their PC and equipment to avoid and mitigate editing issues.

Ultimately, content creation is repetitive mini games that barely ape the nature of content creation itself. I cannot for the life of me think of a better alternative, but the game does encourage you to blindly emulate famous YouTubers, rather than develop your own existing style. You will make innumerable Let’s Play videos and repeat the same actions ad nauseum.

Still, what I’m assuming is YouTuber’s Life 2’s key demographic (young kids, pre-teens) will most likely find content creation a fun and simplistic side activity to the game’s life-sim mechanics. Speaking of…

As I stated earlier, YouTuber’s Life 2 is sim-game (opting to simulate the content creation experience) and half life-sim. Life-sim game are all about making friends and earning a living, with notable games in the genre including Animal Crossing and Stardew Valley. These games are usually fairly relaxed and have even opened up the doors for developers looking to create what is quickly becoming known as the “wholesome games” scene.

YL2 once again, barely dips it toes into the water with its life-sim elements. You can meet other people, build up relationships, but these ultimately feel hollow. I found myself getting chummy with everyone possible, but only because I had time to kill when I was creating content. Some characters also are horrible people, with one character (who features prominently on the title screen of the game) asked me to lie to her roommate, so that she would move out of their shared apartment. This part of the game felt completely amoral and isn’t something I’d like to encourage young kids to experience in a game.

In addition to creating content and making friendships, the occasional special event will show up. These too, do not resolve in a satisfying way. In fact, I found myself even more disappointed with how they resolved. At one point, Pewdiepie showed up in my part of town, and after being introduced, asked me to root out a scam. Literally 5 minutes later, I had solved the mystery, with Pewds thanking me and even offering to film a video with me. This might sound exciting for fans of him, but he wasn’t involved in the content mini game at all. It was just me, creating a video by myself, with the narrative saying Pewds and I made it together after the fact – a completely missed opportunity.

Youtubers Life 2 barely dips it toes into the water with its life-sim elements. You can meet other people, build up relationships, but these ultimately feel hollow.

It might sound like I haven’t enjoyed my time with Youtubers Life 2, but I did…at first. I enjoyed making a chibi avatar of myself, and the various nods to content creation and the culture surrounding it. That’s as deep as the entire game gets though: nods. Not full exploration, not a rewarding or even engaging narrative, just repetitive mini games and social interactions with ultimately, no pay off. This franchise has the potential to take off. To blend elements of Animal Crossing with a deep simulation of content creation, but instead, it barely gets off the ground.

There isn’t even any multiplayer to speak of, which is truly a shame. Youtubers Life could become like Rec Room, where players interact and share creations together. Imagine if kids could keep their faces and identities safely off the internet, but still get the experience of making YouTube-style content together, and you have simulated representations of famous tubers they aspire to be like, such as Pewdiepie. A huge, interesting and creative safe space, rather than this banal, barely present repetitive grind.