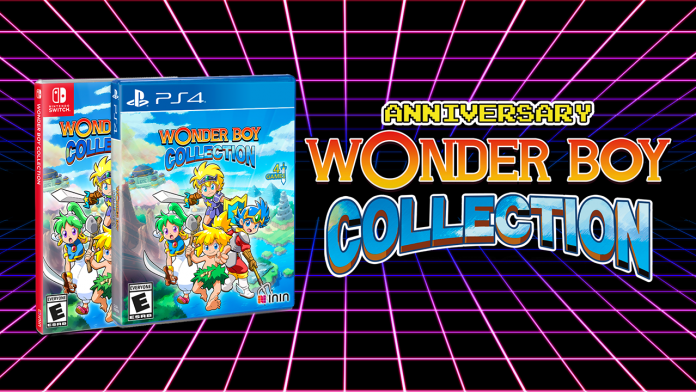 I can honestly say without hyperbole that the Wonder Boy series of games is one of my all-time favourites. The series begins with a very humble arcade side-scrolling platformer in the arcades and finds itself as one of the best franchises on Sega’s home consoles, thanks to a visionary game director and a team who embraced experimentation.

There really hasn’t been another series quite like it. While other developers and arcade cabinet manufacturers were in the quarter-munching business, Westone were aiming to deliver a rewarding and challenging experience, as well as a never-before-seen level of adventure and wonder.

The entire retro Wonder Boy series spans 5 games, with four of them bundled together thanks to Bliss Brain and ININ Games. Featuring multiple versions of every the most popular titles, as well as shaders, fast forward and rewind features, state saving and more, the Wonder Boy Collection aims to give players a premium Wonder Boy experience that embraces modern gaming conveniences.

In recent years, there have been remakes of the original Wonder Boy (Wonder Boy: Returns Remix) Wonder Boy III: Dragons Trap, Wonder Boy IV (Wonder Boy: Asha in Monster World) and a spiritual successor that Nishizawa advised on called Monster Boy. These are all noticeably absent from the Wonder Boy Collection. While I’m certain it would be an absolute licensing and profit-sharing nightmare, this collection does feel a little lacking considering how amazing each and every recent Wonder Boy title has been. While many didn’t enjoy the more shooter-centric Wonder Boy III: Dragon’s Lair, its omission here is a little baffling, if even for the sake of the series being a complete package.

All Steak, No Sizzle

After playing the Wonder Boy Collection for the past few weeks, I am sorry to say that were it not for the stellar nature of the games themselves, this would be a difficult collection to recommend. Presentation is truly lacking, with a barebones menu that is a small step above early lifeless DVD menus. There is no opening cutscene, no new artwork or animations. You simply select your language, and the games pop up in a menu in front of you.

Difficulty is able to be tweaked to your liking, as is the game’s presentation, though I usually leave the games as faithful to their original graphics as possible – I don’t yearn to play retro games on a CRT TV, personally.

Thankfully, the games themselves still hold up today. Wonder Boy features a mischievous young boy (who later became known as Tom-Tom) who has to rescue his girlfriend from King (later known as Drancon). The game is incredibly simple, run from one side of the screen to the other, avoiding or defeating enemies, collecting power-ups, munching food to regain time (which also represented health) and navigating challenging platforming segments. It was a accessible mix of gameplay that worked so well, and wasn’t afraid to be a little silly. Even after all this time, smashing open an power up egg to find a skateboard inside is still exciting. The only thing better than leaping from cloud to cloud over octopi is doing it on a skateboard.

Wonder Boy in Monster Land is where the series really begins to find itself. While still offering a side-scrolling platformer experience, the inclusion of currency, somewhat randomized loot and upgradeable equipment really took the series in a terrific new direction. Arcades were disappointed that players were spending so much time on one machine for less money than usual, but seeing how far one can get (as well as what equipment they would end up with) gave this game the difference it needed to truly shine. I will say that thanks to state saving in this version (as well as the standalone Nintendo Switch port) I have finally finished this game after 30 years of me playing it.

Wonder Boy in Monster World is one of my favourite games of all-time, and for several reasons. It benefitted from the Sega Genesis/Mega Drive’s hardware, featured cute anime-style sprites, featured puzzles, and doubled down on the RPG mechanics established in Monster Land. This, hands-down has to be one of the Genesis’ greatest games. It’s challenging, rewarding, and simply gorgeous. Having it available on modern consoles is great – especially if you want to chip away at it when you find yourself with free time on the go, on the Nintendo Switch.

Wonder Boy IV takes place in an entirely new setting, taking inspiration from ancient Persia and fairy tales. With a female protagonist, this felt like a Wonder Boy game, but something completely different at the same time. There were more complex gameplay and animations present, which is impressive given the series was still on the same hardware as the previous entry in the series.

The Nostalgia Trumps the Lack of Extras

I’ve had a great time revisiting these legendary retro games with some modern conveniences thrown in, but I find myself wanting more from a bundle like this – especially when it is available on Strictly Limited games in a number of collector’s editions. There is a smattering or artwork available, but again, this is largely disappointing. Recently, StrafeFox made a mini “making of” documentary on the Wonder Boy series, which offers an incredible amount of insight into the games and how they all came to be. It also features interesting artwork as well as notes on its influences and evolution. Do yourself a favour, and seek it out.

Review: Police Simulator: Patrol Officers – I am the Law