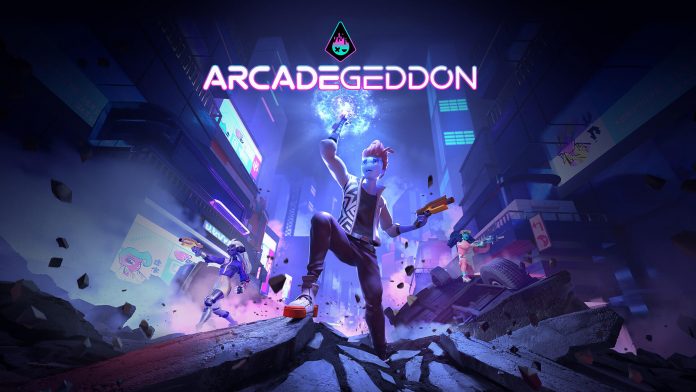 We’re at a real pivotal point with shooters at the moment. The Battlefield series is on life support, after the disastrous launch of Battlefield 2042. Call of Duty seems hellbent on catching up to the ridiculousness that Fortnite offers, while Fornite itself maintains a steady pace of absurd cosmetic updates while offering significantly less in the way of major improvements.

All of this…just makes me tired. I don’t need the wheel reinvented, but I have found myself longing for something accessible and fun. Something I can play with friends.

My prayers have been answered and then some, by Illfonic, with their latest title, ‘Arcadegeddon’. Now don’t get me wrong, it isn’t a perfect game by any stretch, but its core gameplay loop is fun, it’s stylish, it’s easy to pick up and play, and you can experience it all with friends.

Once you collect a bunch of hacks and up the difficulty to your liking, Arcadegeddon nails being an enthralling challenge.

Visually, Arcadegeddon is bright, almost offensively so. It’s mix of 80’s neon colours and use of contrast might be phoned in with other games, but its inclusion here makes total sense within the design of the game. There are areas in the game that feel like you’re actually in an over-the-top RGB PC case, complete with glowing RAM sticks, motherboards, etc. It’s nothing groundbreaking, but I enjoy the visual style nonetheless.

Arcadegeddon’s biomes tread familiar ground for those who have played classic games. Not that this is a bad thing, but early on, players will experience a Sonic the Hedgehog style tropical island, cyberpunk style city streets, and a demon realm that looks like it belongs somewhere near Bowser’s castle. As fun as these locations are (even moreso when you get enough of a feel for them so you can sprint through some areas) I am hoping more original areas get added post-launch.

With regards to the game’s soundtrack, it’s loaded with trap and dubstep. I’m not going to lie, I’m not a fan of either, but the game’s music really does belong here, and is a key player in immersing players in this wild digital world. If you’re into trap and dub, you’ll be pleased to know that Illfonic enlisted the help of some well known producers, such as Milano, South, JuLo, thook, and more.

Rage Against the Machine

Arcadegeddon’s plot sees players trying to save their uncle’s video game and arcade from a the sinister Fun Fun Corporation (FFC) who takeover all video games through hostile takeovers and sabotage. Your uncle has combined all of his games into one last hurrah, a final fantasy, if you will, and it’s up to you to save the day.

In regards to the story, Arcadegeddon isn’t going to win any awards. I’ve played the game with a number of people, and they all agree that there is way too much dialogue at times, and it is truly cringey the majority of the time. The character designs are slick for the most past, with everyone looking an actually cool version of the TV show Reboot, or if Tron: Legacy was about street fashion. That being said, your uncle spouts far too much exposition at the beginning of the game, and every other character you meet won’t shut up spouting both actual and made up internet/influencer speak. “Hashtag #Feeltheflop”. Ultimately, I found it hard to care about characters, or the story as a whole, and I wasn’t alone.

Thankfully, once you get past Arcadegeddon’s early stages its easy to jump into a quick run or two without being bothered by exposition (or pointless dialogue, for that matter) dumps.

A Particular Set of Skills

The story does, however, set up the core gameplay. Players will take the fight to Fun Fun Corp in Uncle Gilly’s game itself, blasting their way through various biomes, levels and arenas as they go.

Being a shooter, players are able to run, jump, sprint, hip-fire, aim down the sights, rifle butt, and dodge roll. There’s also a nifty slide mechanic that if we’re being honest, feels like it exists simply to look cool (and it does). Playing skillfully awards players points which can also be stringed together to form combos. There’s nothing quite as cool as sliding down a ramp, shooting enemies a few times before quickly swapping to your baseball bat and whipping your enemies off a cliff.

Throughout a run, players will find chests both out in the open and at times, cleverly hidden. Chests can contain weapons, ammo, coins, and hacks (which act like perks in other games). There isn’t a huge amount of weapons in Arcadegeddon, but I appreciate how varied they are. There are standard and elemental weapons, and there is everything from baseball bats and swords, to SMGs, shotguns, assault rifles, sniper rifles, grenade launchers, rocket launchers, as well as more unique weapons. One weapon fires grenades that knockback enemies slightly, while healing your friends in a pink explosion of love hearts. Another launches discs at enemies, which a unique death animation that cuts your foes in half (don’t worry, parents, they’re simulated robots). One of my personal favourites, is a nod to DigDug: the pixel popper, which inflates your enemies until they explode like a balloon.

There is a mix of objectives too, such as finding coloured keys to open their corresponding locks (a nice little nod to DOOM), destroying glitches, holding a key area for a designated time, and more. Everything is shuffled around randomly too, so players never quite know what objective and location are coming up next.

Every few sections, players are able to opt into a boss fight, which at times can be significantly challenging – in a good way. I made the mistake of thinking the game was going to be a walk in the park at the beginning, so I purchased difficulty increases between sections, in order to gain more experience and money. I have had my virtual hide handed to me on more than one occasion.

Fail to complete a level or defeat a boss, and it’s game over, although players do have a continue up their sleeve (talk about old school!). Choose to give up or fail again, and it’s game over for real, with players kicked out of their run and returning back to Uncle Gilly’s Arcade. Depending on your age as a gamer, this might sound incredibly harsh. Then again, it might sound like the good old days. I learned valuable lessons rushing into beefed up boss battles and paying dearly for my hubris. However, I felt motivated to do better the next time I played the game – something I haven’t felt since the good old days!

Completing successful runs and challenges earns players experience levels and currency, which can be used on upgrades, new skills, perks, starting weapons, and cosmetics. Skills are able to be deployed during a run and include launching a fireball from your hands, or more supportive skills such as a healing dome. Perks are passive buffs such as extra defense or damage. There’s not much more to say, except that these will allow players the ability to support each other, or create a build that’s more suitable to playing solo should they choose. They’ll also give you the extra edge against the brutal spider tank boss.

Starting cosmetics are fiar, but limited. Unfortunately, the various outfits are also locked to masculine or feminine looks, so if you want to wear a certain item it might not reflect your gender. It’d be great if outfits are updated to have both feminine and masculine options, but at the moment, that isn’t the case.

Then there is the premium shop and its currency, “arcoins”. Arcoins are purchased with real-life money through Xbox Live, the PlayStation Store, Steam, or whatever, and then used in the game to unlock more desirable outfits. It’s a shame that best outfits in the game are locked behind a paywall, and I get it: this type of thing is commonplace in games nowadays, but I won’t be spending money on these premium outfits any time soon, and truly wish that I could unlock everything by playing the game (even if it was a tad grindy).

A Blast with Friends

I was fortunate enough to be able to play Arcadegeddon for quite a bit leading up to its Xbox release. During this time I had my progress reset multiple times, and could only play single-player runs. I was already having a good time, but being joined by my regular gaming buddy levelled up the experience in the best way. We were able to cover each other, revive each other when downed, and vary our equipment and skills to suit our different playstyles while still supporting each other.

It’s a blast to be able to carefully make your way through a level, sharing loot and annihilating baddies. It’s even more fun to sprint like maniacs through a level, sliding, shooting and going full Negan with your trusty baseball bat. Once you collect a bunch of hacks and up the difficulty to your liking, Arcadegeddon nails being an enthralling challenge.

Arcadegeddon is a game that scratches an itch that I’ve had for a while. I enjoy its earnest attempt at bringing together classic game mechanics such as high-score leaderboards and continues with modern game design. Illfonic are truly coming into their own as a developer and the future is bright for both them and Arcadegeddon. In terms of pricing, $44.95 might feel a little steep for what’s on offer here, but the dev team are hoping to add more content in the near future.