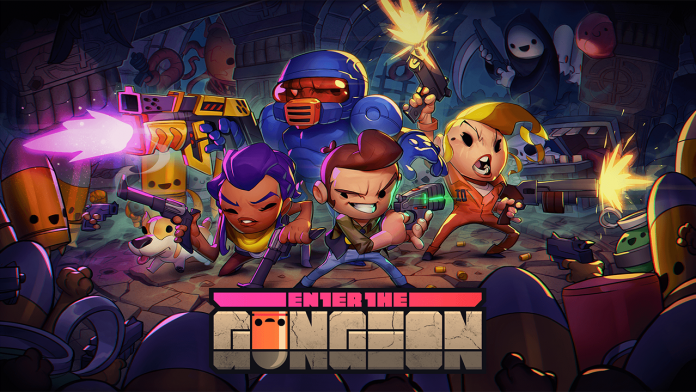 This review originally appeared on Sticky Trigger, my original website.

Blending two genres of video games together isn’t always an easy task. Sure, many AAA titles have managed to sprinkle in RPG elements into FPS games as of late, though few games manage to combine elements of multiple game genres to create something truly memorable or exiting.

Enter the Gungeon sees players attempting to defeat the titular Gungeon with one of four “Gungeoneers”. There’s the Convict, who is armed with a pistol, shotgun and molotovs, The Pilot, who carries a plasma pistol and lockpick, The Hunter, who carries a pistol and crossbow while accompanied by her faithful dog, and The Marine, who is armed with a semi-automatic pistol.

Each character appeals to a slightly different playstyle, and either has different perks or equipment that are unique to them. For example, The Pilot’s lockpick has a single chance to open up locked doors and chests, and buys goods at the store for a better price than the other characters. The Marine only has a pistol to begin with, but can call in ammo drops for weapons he finds within the Gungeon. The Hunter has an excellent secondary weapon for beginning the Gungeon, and her dog searches for items and brings them to her once a room has been cleared.

Of course, the only thing better than facing hordes of baddies in the Gungeon is bringing a friend along with you. Enter the Gungeon allows players to recruit a co-op character, The Cultist. The Cultist carries a Nerf-style foam dart gun and a revive item. The Cultist gains strength when the main player is defeated, giving the impression they are to be played as a medic.

While a character with a revive item is appreciated, a universal revive mechanic shared among all the characters would have been better. Forcing a player to play as a certain charcacter when there are multiple characters is a bit strange, even when all beginning weapons are basically the same in terms of performance.

The dodge roll is essential to surviving the more nightmare-inducing moments in The Gungeon, as you are immune to damage while airborne. During the first half of the roll animation, you’ll be able to dive through bullets and explosions without even taking a scratch. Once you connect with the floor, though, you will begin to take damage when encountering gunfire and grenades, so timing the dodge is key.

The Gungeon is made up of multiple chambers, with a large gun barrel elevator shooting you to the next area once you complete a chamber. Early on in the game, players will quickly discover that everything is gun and bullet-themed. Your health is depicted on-screen by two red bullet casings criss-crossed, making a heart, and the enemies themselves are sentient bullets, grenades and other types of ammunition.

Not only is everything bullet-themed, the game is wonderfully retro with its pixel art aesthetic. The art style compliments the everything-is-a-bullet theme quite well, and there’s even a certain degree of cuteness to the game (especially with the bullet that hops into a chamber at the loading screen).

Like other rogue-like RPGs, players can discover secrets, items, and weapons within The Gungeon. It isn’t long before players discover some of the game’s unique and often hilarious guns, such as the Siren, a water-spraying shotgun with a fishtail, the Proton-backpack, a laser stream that ensnares and harms enemies (and a definite nod to Ghostbusters), and the Demon Head, a literal demon head that shoots lasers out of its eyes and lights enemies on fire.

There is a staggering amount of guns available to unlock and find in the Gungeon, as well as items that will aid you in your quest. You’ll have to do your best keeping them from chamber to chamber though, as you only have one life in The Gungeon and drop everything on you when you die. While starting over might sound like a pain, you can upgrade the elevators to skip floors after a certain point in the game – but it will cost you.

In addition to delightfully cute bullet, bullet-ghosts and grenade enemies, each chamber of The Gungeon has a shop, and a boss to defeat. The store carries keys, health, defense, usable and passive items, as well as guns. Behave yourself in the shop though, the shopkeeper is heavily armed!

The bosses are a true test of a player’s resolve and skill, often filling the screen with explosions and bullets. The game quickly begins to resemble the “bullet hell” shooters of yesteryear like Mars Matrix and the Raiden series, though players can survive with a well-timed dodge. They also have blanks, with act like a bullet-clearing smart bomb, though they only begin The Gungeon with 2.

Enter the Gungeon is a game made with a lot of love for pixel art, retro and top-down shooters, as well as RPGs. While a lot of games (especially those on Steam) aim for a retro art style, few come across as such a genuine homage to retro games as Enter the Gungeon. It’s an extremely addicting title, though it could be a little more accessible at the start of the game, and the co-op could have been handled just that little bit better. 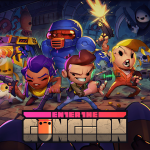