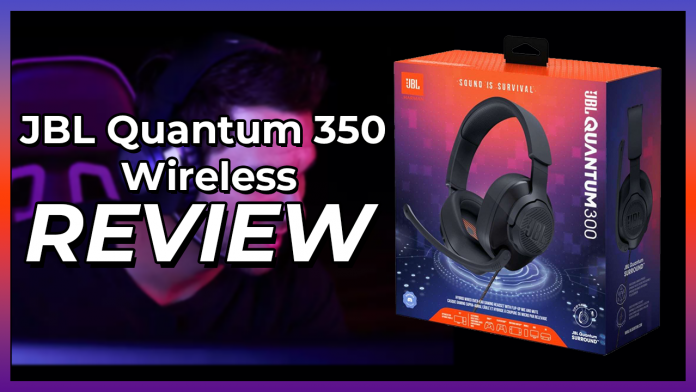 The Quantum 350 is fantastic value for its asking price, offering decent battery life, comfort and excellent sound when paired with JBL’s QuantumENGINE software.

Speaking of current gear, JBL released two new headsets in their JBL QUANTUM range of surround sound gaming headsets: The JBL QUANTUM 350 and the JBL QUANTUM 610. Both offer similar features such as 2.4GHz wireless sound, but the 610 has slightly bigger drivers (50mm as opposed to 40mm) and a more comfortable design. I went with the more budget-friendly JBL QUANTUM 350 for my review. Note: I filmed an unboxing of the JBL Quantum 350. If you’re interested in it, check it out below.

The JBL Quantum arrived in a stylish box featuring their signature orange to violet-blue gradient. In front of the gradient was a large product shot, from which I could immediately notice the little differences between the 350 and my faithful JBL QUANTUM 300 headset.

The box also features the JBL QuantumSURROUND logo, as well as a diagram indicating the headset is capable of 3D surround sound. It also lists the other features and specifications we’ve listed above, as well as the headset’s device compatibility. The Quantum 350 works with PlayStation 4 and 5, Nintendo Switch, Mac and PC (which it has been optimized for). It is also “Discord certified”, meaning it has been designed, tuned and tested to work with the Discord online VOIP and messaging program.

The back of the box gives you a rundown on the headset’s key features, as well as lists other apps it is compatible with (Skype, Teamspeak, Discord again). It also lists the battery life (22 hours of use) and the fact that after just 5 minutes of charging, the headset can be used for an hour. It also breaks the bad news that the headset is not compatible with Xbox. This is out of JBL (and many other headset manufacturer’s hands) as Xbox does not make use of Bluetooth, using their own in-house wireless tech instead.

Outside of the box, the JBL Quantum 350 Wireless Gaming Headset is a sleek and stylish looking headset. Aside from the large orange “L” and “R” in the ear cups, and the small visible wire at the headset’s base, the headset is entirely black. Batman would wear this headset.

JBL have changed up the ear cups with this Quantum headset. As opposed to the thicker, rounder ear cups, these ear cups have ruffled leatherette, and are a more ear-friendly design.

The headset feels light, but for some reason, the exact weight isn’t listed on the box or on JBL’s site. I’m just speculating, but it feels roughly the same weight as the JBL Quantum 300. Wearing it, it is extremely comfortable. I’ve been using the JBL Quantum 350 for the past few weeks and while all official documentation and marketing state that the headband features memory foam, the headband on my 350 doesn’t spring back, and doesn’t feel as thick as memory foam normally does. It’s still comfortable, but you may need a break after long sessions.

I’ve used the JBL Quantum 350 on almost every possible device I could: my PS5, Switch, and PC. I’m going to be honest, the results on each device are truly varied. Here’s a breakdown of my experience with each device. I will say at this that it’s a shame the headset isn’t also capable of wired sound, as then I would be able to use it on my Xbox as well. While this isn’t common among headsets it is appearing more and more.

Deathloop’s funky basslines and over-the-top gunshots sounded fantastic through the Quantum 350, immersing me in the game’s retro sci-fi environments. Vampire: The Masqeurade Bloodhunt sounded serviceable, but the game itself is a frustrating experience and the headset offered no advantages that I could discern. Terminator: Resistance Enhanced soundded muddy and bassy, though this could be a deliberate choice for the game in an attempt to sound more like the quality of 80’s cinema. With Spelunky, I was able to appreciate details in the game’s soundtrack I wasn’t able to before.

Ultimately, using the JBL Quantum 350 on the PS5 was a great experience, with the occasional muddy sounds in a game. Sony’s Pulse headset was updated to have selectable equaliser presets not too long ago, so here’s hoping third party headsets get the same support soon – especially considering the Quantum 350 has the Sony Pulse 3D beat in quite a few departments.

When first opening up the QuantumENGINE software, users are greeted with the tutorial, which will take them through the software’s various features. After that, players are able to tweak some intial settings, such as microphone mute/unmute, volume level, and spatial sound on/off. They’re also able to see the level of battery the headset has, as well as whether or not it is connected to the USB connector. Lastly, they’re also able to customise a number of profiles – handy for audiophiles listening to a varity of stuff.

After the initial setup, you’re able to select from a number of equalizers. These all do exactly what they say on the tin, with Flat being a neutral sound profile, Bass Boost bringing the doof, High End Boost delivering more treble, etc. If you’re sensitive to audio or feeling a little fatigured from loud gaming sessions, there is the handy addition of Long Session, which softens frequences that might fatigue certain people after a while.

After the equalizer is set, players can then opt to turn on spatial sound, as well as its profile. There’s Precise, Balanced and Immersive modes, each of which will scratch a different itch. I went with Immersive at it sounds great, and aims to emulate the acoustics of a living room. Now that we’re set up, it’s time to jump into some gaming!

PC is where I’ve done the majority of my gaming recently, with the JBL Quantum 350 joining me for every session. I have played a lot of Core Keeper, which sounds great – especially as the soundtrack is far better than it ought to be in a charming survival crafter – but ultimately, if I wanted to test how good a surround sound headset sounded, I had to go with some truly spooky horror. With that in mind, I delved into In Sound Mind and Resident Evil 7 Biohazard.

In Sound Mind has some truly tense moments, as well as more subtle moments made all the more terrifying by having decent spatial sound…and turning it up loud. I was pursued by a weeping ghost in a department store in one level. If you look her in the eyes, she lunges at you, causing damage. The only way around this, was to leave your back facing her, no matter what. I could almost feel her icy breath on the back of my neck as I navigated my way through the store.

Resident Evil 7 Biohazard needed a little tinkering, as the game itself has a few options for audio. I found it was best to turn off the game’s 3D audio and use QuantumENGINE instead, with the game’s headphones settings applied. Once that was done, I was creeped out by the wet squelching noises from the black ooze piles in the Baker family’s basement, then later terrified as the ooze monsters pursued and surrounded me. I died. A lot, but at least it sounded great.

PC Verdict – The Quantum 350 and QuantumENGINE combine to create an experience that when considering its price tag, spoil its user.

The Quantum 350 is fantastic value for its asking price, offering decent battery life, comfort and excellent sound when paired with JBL’s QuantumENGINE software. Its performance on consoles can vary depending on the game, but it remains a stellar piece of kit regardless of what its played on. 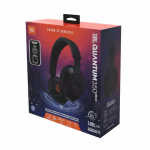