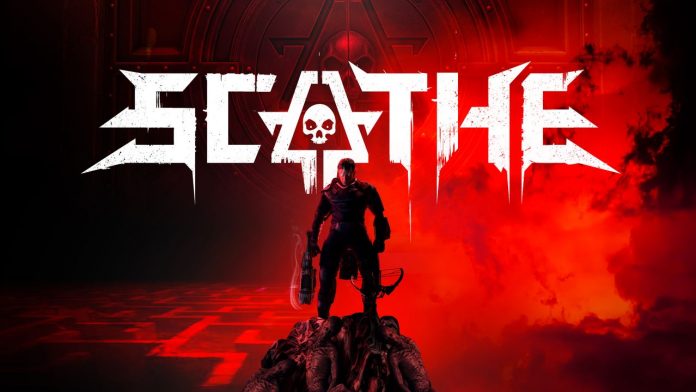 I’m not a fan of reductive comparisons with media. Some gaming sites will try to wrangle in readers by telling you almost every cozy and chill game is Animal Crossing meets blank, which is an incredible disservice to hard working developers everywhere. I’ve seen similar comparisons to Scathe, a newly-released FPS bullet hell game, which is apparently “DOOM meets Metal Slug”, “DOOM meets classic shmups”, etc.

The concept of ultraviolence, accessible FPS gameplay and dodging projectiles felt too promising to pass up, so I put my hand up to dive into Scathe’s labyrinthian dungeons. Is it everything I wanted to be? Here’s my full review.

All Killer, No Filler

Scathe wastes no time thrusting players into the action. The story does little more than introduce players to the world of Scathe, with the game’s protagonist (the titular “Scathe”) brought before their divine creator, and tasked with bringing down the armies of their enemy. After a single cutscene, the Scathe enters their enemy’s dungeon, ready to fight.

Immediately noticeable, is how closely Scathe treads to DOOM when it comes to the visuals of its level design. Metal plates and grates are everywhere, as are giant mechanical doors, cold stone, and similar aesthetics. One you break out of the starting areas though, things become a little more unique, with sections of the labyrinth almost feeling like biomes within it. One area was overgrown with plants and plant-like entities, all with a sickly green glow to them. Where the starting area overwhelms players with sheer numbers, twists and turns, this area’s overgrowth hid glowing green spider monsters until they were ready to ambush me.

If you have played games like DOOM and modern boomer shooters, you’ll know how to play Scathe. Players can run, jump, dash in mulitiple directions, etc. You’re also able to wipe blood and gore from your face using F, which would be a fun gimmick except you need to do it to an excessive amount. At first, I laughed manically at the sheer amount of gore and gibs flying about, wiping my face before jumping back into the fray. After some time with Scathe, I’m simply wiping my face halfway through a massive battle, as well as at the conclusion of it. If only the blood and gore faded away with time, or slid off the screen when you dashed…

Early in the game, players will be presented with their first weapon, an automatic rifle with a grenade launcher attachment. It looks like something you would unlock mid-way or even at the end of another FPS. It’s big, bulky, and intimidating. While it may seem weak considering what it is, it makes perfect sense for this bullet hell game – you need a weapon with a generous magazine and the occasional grenade to sling at groups or tougher enemies.

Eventually, players will unlock spells and off-hand weapons to aid them in battle, such as freezing every enemy nearby as well as a hand cannon that is a one-shot kill for most enemies. The freeze ability in particular made me feel as though I could finally survive some of the more hectic sections of the game, but it does feel overpowered. There’s a balance here that’s been missed.

While we’re on the subject of weapons, off-hand weapons and spells, Scathe can’t make up its mind on when to give these to players. I’m not sure if I’ve just had rotten luck because of procedurally-generated levels or what, but I’ve played far too much of the game with just my starting rifle, and only just began to unlock spells and off-hand weapons. The enemies are getting tougher and more strategic, and my rifle feels like a pea shooter in comparison to what they’re using against me. I can’t overstate how frustrating this feels.

It isn’t just the doling out of weapons where Scathe feels miserly, I also find myself questioning how long a dungeon run or the game can possibly go for. There isn’t really a story here, and aside from the occasional growling compliments or insults from the divine creator, you’re pretty much on your own in the labyrinth. This lack of a story with the repetitive gameplay begins to grate after a while, as I don’t feel the gameplay is rewarding enough on its own. If there were any events taking place between every few rounds, I’d feel motivated to complete Scathe. On my current run, I’ve opted to complete the bare minimum as quickly as possible. To hell with collecting runes and killing every enemy, I feel like I’ve been through dozens of the same doors and subsequent areas.

If you’re wondering how Scathe finds the balance between bullet hell and FPS, it’s actually quite clever. The game looks like a modern boomer shooter like DOOM, but its enemies fire a mix of projectiles. Like Enter the Gungeon, Metal Slug, Mars Matrix and other games with bullet hell mechanics, the projectiles fired at the player move a variety of speeds and behaviours. Some enemies fire a slow blast of shotgun-like spray at players, others fire a rapid-but-inaccurate spiral of fast-moving bullets. This means that if you’re agile enough, you can dodge your enemy’s fire long enough to defeat them. This isn’t a fresh idea, but its one that Scathe manages to pull off in an entertaining way.

Let’s talk audio. For the most part, the game sound is serviceable, and at times, quite good. Then there are times where it is downright annoying, and even questionable. Some of the game’s guns hit with a satisfying boom, causing flesh to rip and guts to fly with a thick, wet smack. Then there are player-homing enemies that explode upon contact, who screech and attack frequently, and in large numbers. I’m not sure if it’s a bug, but the majority of my time with Scathe was also spent without an accompanying soundtrack. I don’t think this is a choice from the developer, but some kickass tunes would have been appreciated.

There’s a lot to like about Scathe, but there are also times where dare I say it, it could benefit from being more of an FPS than a bullet hell. It’s so grounded in being a bullet hell game, that it weakens the overall experience for it. DOOM reinvented itself to have a focus on maneuverability and traversal, as well as satisfying and simplistic gunplay. Scathe could still have the dodging and projectiles of varying speeds, but give me the occasional level where I’m climbing higher and higher, or launching myself from platform to platform – not just side-strafing and bunny-hopping in flat corridor. As it stands, there isn’t enough longterm appeal for me in Scathe’s overall execution of its premise.