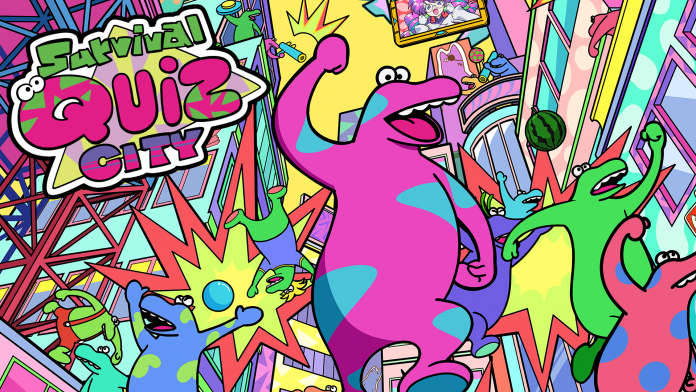 Takeshi’s Castle. Wipeout. These are the two TV shows that gave audiences what they really wanted: people running onto an obstacle course with maniacal enthusiasm, only to be absolutely annihilated by a series of padded and inflatable traps. The greatest non-TV activity you could be possibly be doing, is playing trivia. There’s nothing quite like proving one’s knowledge of the most minute or niche topics, whether it’s to one’s significant other, family, or friends.

Survival Quiz CITY is a fantastic game, no ifs, ands or buts about it, but I can’t help but think that the game needs servers in more regions, and it needs them now.

It makes sense then, that someone has combined trivia with obstacles in an outlandish new video game. Say hello to ‘Survival Quiz CITY’. It’s the brains versus the brawn, where knowledge is king, and the dimwitted are punished by being pummeled with missiles, bombs, landmines and more in a frantic scramble for coins.

I’ve been playing SQC over the weekend, and there’s plenty to like about it. Then again, it can be one of the most frustrating experiences I’ve played in recent memory. Thankfully, you’re able to host your own games, which definitely makes for a better experience than signing up for receiving a butt-kicking in a full online lobby – and being at the mercy of someone else’s host connection.

The Brains vs The Brawn

Starting a game of Survival Quiz CITY drops players into the first round of an online game. In my experience, these lobbies were usually chock-full of other players – predominantly Japanese. According to a lot of the reviews on Steam, this game only has Japanese servers, and can only be played with Japanese or English language options. This might not be a game-breaking experience for some, but a lot of players are going to be at a disadvantage when it comes to answering trivia questions quickly.

At the start of a round, players answer a trivia question (or questions). These can be:

If players succeed, they can use a jump-pad to make their way to the armory, where they can select a weapon that they will use to annoy the incorrect players as they run an obstacle course. If players answer questions incorrectly (or are the slowest among players when everyone answers correctly) they are dropped down a slide and forced to run an obstacle course below.

SQC is fairly balanced when it comes to using weapons against the incorrect players. Machine-guns will spray projectiles that slow down their targets as they attempt to run, climb, and jump their way through the obstacle course. Bombs take a significant time to explode, but deal massive knockback, while bazookas fall in between.

Running the obstacle course, naturally, is a vastly different experience. Not only are players competing with the correct team, but they’re also in a mad dash to survive the course itself in the set time limit. This means it’s every person for themselves, though there are times where teamwork is optimal to success. For example, players may have to push heavy structures against a wall, so that they can climb them and progress onto the next stage of the course. As players will run out of stamina, another player may take over, or offer cover from projectiles by using a shield, or join in to push the structure faster.

If players fail to finish the course, they’re eliminated. Those who survive, will be dropped into a lobby where they can go exploring for coins, take a chance on a capsule toy machine which offers a random amount of coins, or spend their hard-earned coins on items.

Items are split between upgrades, and usable items. Upgrades can offer perks for both correct and incorrect players. If you’re confident in your trivia knowledge, you may want to upgrade your offensive capabilities with increased damage, reload speed, weapon ammo, and more. If you’re not feeling confident with your trivia skills, you may want to boost your movement speed, mitigate some knockback, etc. Usable items usually take the form of landmines, or banana peels, which are self-explanatory.

Okay, so going to into this game, I had zero expectations. I’m aware of the comparisons to Fall Guys, but always welcome friendly competition in my entertainment. After all, do you think Sega let Nintendo stop them from making games? Or Burger King let McDonald’s stop them from making burgers?

Survival Quiz City, I feel, is at an immediate disadvantage. For one thing, there are only Japanese servers for the game. While I’m based in Australia, I still experienced lag in online lobbies – I can only imagine what people in Europe or North America would experience. Another disadvantage, is that some levels feature mechanics that aren’t explained, despite the games tutorial menus. I spent the majority of a round being extremely confused as to what to do. Unfortunately for me, it was one of the final rounds of a neck-and-neck race between myself and a handful of other players. I lost, and I was left with a sour taste in my mouth.

Then there were the issues in the massively-populated lobbies, where I would repeat the same actions, or run in place quite often. Obviously, this is related to my previous point about Japanese-only servers, but it was unbearable in more than a few full online lobbies. Thankfully…

Just as I had rage-quit this game. As I felt inspired to rake it over the coals in a massive rant/review, I decided to try and host my own game. Setting up an open lobby, I watched as slowly but surely, players began to populate my game. After around 15 players or so, the anticipation was killing the majority of them, so we started the game.

It was great! Not only was my connection better, we also cultivated a friendly but competitive culture in the game. People were definitely playing the game, but teams worked together, instead of the chaotic dogpiles on both sides I experienced in Quick Matches. I even began to download trivia questions online and began to write my own custom quizzes. Game after game, I had an absolute blast playing SQC as a host. I made friends, rivals, and played for hours on end.

Survival Quiz CITY is a fantastic game, no iffs, ands or buts about it. There is definitely room for more obstacle course games, but I can’t help but think that the game needs servers in more regions, and it needs them now. It also needs a lot more marketing, because right now, the game is struggling to have a decent amount of players. This is a shame, as the combination of trivia and obstacle courses makes for a fun but fair experience – if you speak English or Japanese.

If you’re curious about Survival Quiz CITY, download the guest pass, make friends with a host, and jump in – I’m certain you’ll have a hilarious and exciting time with it, and will end up a fan.