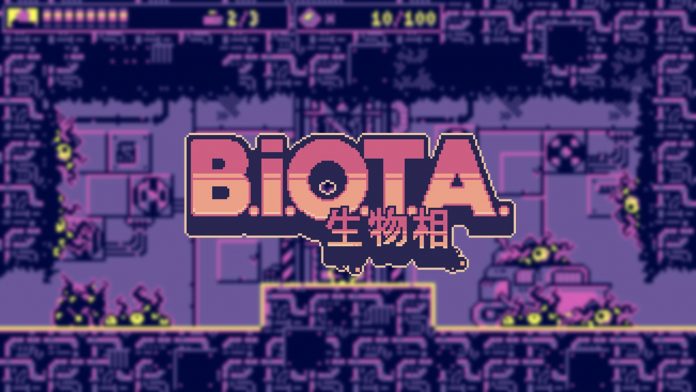 There’s nothing wrong with a game designed for retro purists. Usually the “retro” qualities of a modern retro-inspired game begin and end at the audio-visual department, while still holding the player’s hands and missing out on that key factor in many a classic game: difficulty.

I’ve been playing B.I.O.T.A. a lot lately and if there’s one thing I can say about it, it doesn’t hold the player’s hand at all. It is retro to the core. It is retrocore.

B.I.O.T.A is a 2D metroidvania where players control a team of mercenaries who have to fight off an alien menace that has overtaken a mining colony. They’ll need to navigate challenging platforming sequences, collect alien specimens, and find a cure before the alien “agent” arrives on Earth and mutates mankind.

Immediately noticeable by the trailer, is the game’s art direction. Using a series of limited colour palettes, developer small bros have recreated the look of a truly iconic era in gaming. There’s a plethora of palettes available, with the player able to unlock more as they progress through the game. Whether you like the look of a CGA graphics, or yearn for the look of the Nintendo Game Boy, B.I.O.T.A has a colour scheme to tickle your fancy – and then some.

Gameplay-wise, B.I.O.T.A. will be immediately accessible – but difficult to master. Like in countless other action-platformers, players can run, jump, and shoot, as well as use special abilities. You’ll begin with four characters to choose from and unlock more as you rescue them throughout the course of the game. There isn’t much that separates characters aside from their appearance and gun, but that’s all it takes to make finding them interesting enough.

The game’s environments add so much to the challenge it offers up players. So many times, a combination of enemy and claustrophobic environment design added just that little bit more pressure to an encounter. I’m gonna be honest, B.I.O.T.A. has kicked my butt a lot more than I’ve kicked its butt. Persevere beyond the initial ass-whooping, though, and you’ll discover a truly addicting game.

I haven’t completed B.I.O.T.A., simply because it’s a blend of difficulty, action and design that truly challenges me. I praise its dedication to emulating the ultra-difficult classic platformers of the past. There were countless times where I felt like I was playing some of the hardest Gameboy games of yesteryear – it’s that authentic.

Speaking of authentic, it would be a disservice a this point to not mention the game’s soundtrack, which quite frankly, is fantastic. Each environment has its own unique identity, thanks to a cleverly minimalist art style as well as the well-composed and constructed music. I still have the more Darkwave-style music stuck in my head!

I had my doubts about B.I.O.T.A. I watched the trailer, shrugged my shoulders, and thought “why not?”. The art direction was pleasing, the action looked decent, but it managed to surprise and delight me. It might not reinvent the wheel, but it doesn’t have to, either. It simply blends together an interesting and retro visual design, catchy chiptune soundtrack, and simple yet challenging gameplay. If you’re in the market for a new DOS or Gameboy-style action-platformer, check out B.I.O.T.A.