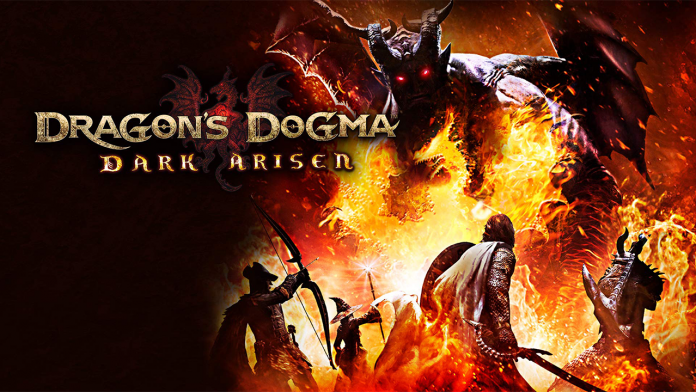 This review originally appeared on Sticky Trigger, my original website.

‘Dragon’s Dogma: Dark Arisen’ is easily one of Capcom’s most underrated games. An action-RPG, it plays like a cross between Dark Souls and the action-RPGs of yesteryear, although it’s a damn sight more accessible than Dark Souls.

Releasing towards the end of the last console cycle, Dragon’s Dogma: Dark Arisen fell into the trap that all the games released at the same time did: being released on obsolete hardware. While it played and looked good, it could have looked and played better on the Xbox One and PS4, or even PC.

Fast forward to now, and Dragon’s Dogma: Dark Arisen has finally been ported to PC. Not only does it have upgraded textures, but it’s also capable of running at 150fps and over 4K resolution. Does the gameplay hold up almost 3 years from its original release?

Dragon’s Dogma: Dark Arisen casts players as a lone warrior from a beachside village known as [INSERT NAME]. The village is attacked by a gigantic dragon, who effortlessly defeats every single warrior from the village. The player runs into the battle, picks up a sword, and foolhardily attempts to slay the dragon.

The fight is over quickly, though the player is not dead, he lies there on the beach, helpless against the dragon, who begins to chant a strange language, and digs out player’s heart out from inside his chest. He swallows the still-beating heart, and leaves the player defeated.

Our hero, however is not dead. Stranded between life and death, he has a glowing scar in place of his heart. If he is to remove the dragon’s curse, he will have to best it in mortal combat.

While the story might sound rather simple on the outset, there are many quests, sub-quests and side quests that the player can complete, with potentially hundreds of hours of gameplay available. The main questline could have been much better, as it tends to lose focus on the dragon, and the cutscenes do little to keep the player engaged.

Our silent protagonist also doesn’t help matters, as we are not even given a dialogue wheel, or even text options to reply to the requests of NPCs. People simply function as quest and information vending machines, which tends to grow stale rather quickly. Considering that Mass Effect came out a few years earlier than Dragon’s Dogma, it’s a missed opportunity from Capcom to not have a more fleshed out dialogue system to fully immerse the player in the game world.

Where the story falters, however, the gameplay flourishes, with Dragon’s Dogma proving to be both accessible and engaging. Players are able to choose from a number of different character customisation options, and choose from a number of different character classes. If you like to fight up close and personal, you can choose one of the warrior classes, if you like to support from afar, there are magic wielders and ranger-type classes, and if you feel like blending a few different classes together, you can do that too.

One feature I particularly like about Dragon’s Dogma: Dark Arisen is the ability to create a pawn, as well as hire other pawns as companions. A pawn is an ethereal being, not truly human, but pretty close to it. They cannot feel human emotions, and are able to be summoned by some people to aid them on a quest. Players can share their pawns with other players, as well as reward other player’s pawns with gifts and new equipment. Your pawn also gains experience when travelling with other players, so sharing your pawn proves a rewarding experience.

I made my pawn to be the ultimate support ranger, who could shoot volleys of arrows onto my enemies as I lay waste to them with my bastard sword. I also balanced out the team with an offensive magic user and a healer.

What’s brilliant about hiring optional additional companions is that you can hire companions that are a higher level than you are, which helps if you plan on attempting a difficult quest, or you are travelling in a extremely dangerous area. Should you survive, you will gain higher experience for your character and pawn.

Combat itself is remarkably simple. You can have a light and heavy attack (which are able to form combos), the ability to sprint and jump, as well as multiple skills depending on your class and equipment. Someone wanting to favour offense might equip a two-handed weapon, and be able to use truly devastating combat skills, while someone wielding a one-handed weapon and shield can use the Shield Bash skill, where they draw the enemies away from their companions by banging their weapons against their shield.

In addition to the various attacks and abilities, is the ability to grapple your opponents. No, you can’t wrestle your enemies like Haggar from Capcom’s Final Fight (although that would be awesome!), but you can restrict your enemy’s movement by holding their arms behind their back. Your companions can then capitalise on this action by stabbing the hapless foe. It might sound dirty but there are no rules when it comes to saving the world from goblins, lizardmen, harpies, dragons, and more.

The grapple also serves as a climbing ability, which is extremely useful when fighting large-scale bosses. In the game’s tutorial, the player will fight a chimera, which has the head of a goat, snake and lion, atop the body of an enormous lion. The goat head casts magic spells, and the snake head defends the chimera from rear attacks, but you are able to climb the chimera, and attack the other heads, opening up weakpoints and other strategic opportunities. Of course, you can also take other risks with the grapple ability, and I wouldn’t advise grappling a harpy or gryphon, unless you want to be taken hundreds of feet in the air until you lose your grip and splatter along the ground below.

If I had one major gripe with Dragon’s Dogma: Dark Arisen, it’s that there is nowhere near enough dialogue for your companions. In battle, they will advise the player how to best attack their foes, and will shout out advice or observations to them. Lines such as “It’s hates fire and ice both!” and “Quickly! Strike it with steel!” are repeated ad nauseam, and while they serve a purpose, it would have been much better to record different dialogue for the same advice.