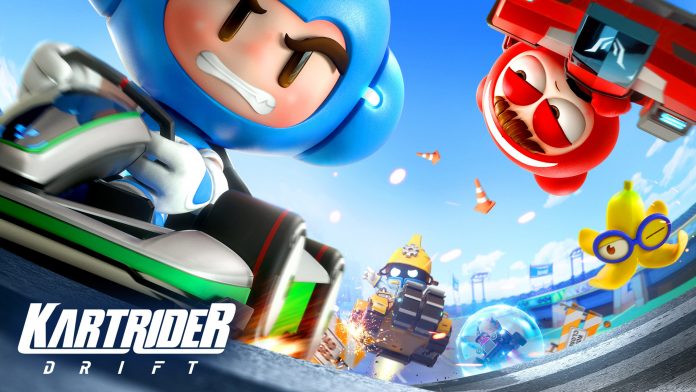 Nexon are a bizarre game publisher. Based in Korea, they have a history of both localizing titles as well as publishing original titles of various smaller developers. Perhaps they bank more on the former as time and time again, multiple fanbases of Nexon-published titles grow in displeasure of the publisher. Despite this, they continue to grow, as well as localize and publish a number of interesting titles.

One such game, is ‘KartRider Drift’, a multi-platform kart-racing game in a similar vein to the Mario Kart and Team Sonic Racing series. Seeing trailers from very early in the game’s development, I couldn’t help but be won over. The game looks cute as heck, and looks to have a heavy focus on customization, as well as regular post-launch content. After a short wait, I was able to check out the game during a recent closed beta. Unfortunately, there wasn’t anything present in the current build of the game to win me over, though I do have my reasons to be keeping an eye on the game…

If KartRider Drift is smart, it will combine the best parts of other kart games and fuse it with the F2P, regularly updated formula of a mammoth title like Fortnite or Call of Duty Warzone

Hands-on with the Closed Beta

First things first, let’s talk about my experience with the closed beta. Firstly, there was very little to do at first. With a tutorial that echoes so many others, players begin the game forced to learn KartRider Drift’s core gameplay and controls, with the game constantly interrupting and forcing players to execute whatever prompt is currently on screen. This wouldn’t be too big of a deal, if the game actually let up and didn’t badger players – especially as there are no unique gameplay elements or controls for the game.

After finally completing the tutorial, I was ready to dive into the game for real. While I was only able to play a traditional racing mode (complete with Mario Kart-style power-ups) it is impressive that KRD also offers a pure racing mode (no power-ups, just racing and drifting). I wish I was able to check out the racing-only mode – especially as I well and truly had found myself on the receiving end of a thorough ass-kicking in the mode with power-ups.

Now, let’s talk tracks. I sincerely hope there are some impressive tracks to be revealed and soon, because what I played was uninspired, run-of-the-mill, standard kart fare. We’re talking black asphalt, white lines, checkered flags, vanilla racetrack. Even Race with Ryan has more interesting tracks, and that’s saying something.

Character designs are cute, and while they all share the same basic design, they all vary from one another and have different personalities on display. There are also several vehicles available, each with a number of different customizable parts, such as paint jobs, wheels, spoilers, etc. Nothing was mind-blowing, but it’s early days for KRD, so I can let that slide. Characters are passable at least, and there will no doubt be some interesting stuff on the way.

Despite KRD causing me to curse at my TV screen, I’m going to be keeping a close eye on this one, for a number of factors. For one thing, the game has been improving bit by bit, due to both player feedback as well as the number of beta tests it has had overall. Secondly, the premise of a free-to-play (F2P) kart racer is intriguing. It could have a massive player base upon launch, and with decent enough matchmaking, players will never be short of racing against others of a similar skill level. Then there’s the post-launch content. It looks as though KRD will have season passes, which might not necessarily be a negative thing. It’s not often we see a mainstream PC kart racing game get regular post-launch content, and the only one I can think of is Beenox’s Crash Team Racing remake, which…was a mixed bag of DLC at best.

Then, there was the experience of playing a kart game online with a lobby of 7 other players. Things. Get. Hectic. And they get hectic quick.

We’re talking pure, unadulterated punishment, with zero chance to catch up if you find yourself in last place. KRD is a wolf in sheep’s clothing – it lures you in with it’s cute, Bomberman-esque characters and then betrays you by whooping your butt for a full race. It is brutal. Some mechanics need tweaking and balancing, such as the ability to catch up when you’re behind. The Mario Kart series keeps things fair by allowing players at the back of the race to have a higher chance of getting certain items that will prove useful, as well shifting stats slightly to allow players to catch up to the rest of the pack. KartRider drift needs to implement something similar before its eventual release.

If KartRider Drift is smart, it will combine the best parts of other kart games (memorable tracks, interesting power ups, balanced gameplay mechanics, unique characters) and fuse it with the F2P, regularly updated formula of a mammoth title like Fortnite or Call of Duty Warzone. I am sure I’ll cop some flak for this, but other kart racers such as Mario Kart squander their potential by dropping the ball with post-launch content.

Combine this, with the fact that the KartRider series is an already established esport series, and it could find itself to be an absolute phenomenon. Kart racing games tend to be accessible, but with nuances that add depth and reward strategic players. So, while I may have had my butt kicked during this beta, I’m rooting for the game. Here is hoping its development goes smoothly, so in the next year or so we’re all playing a cross-platform, online kart racer with all manner of themed content and regular updates!