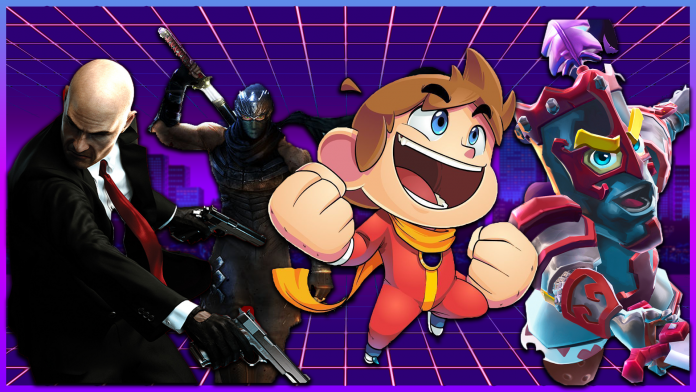 For the longest time now, games are being remastered, remade, and re-released. It seems as through gamers want their favourite games to move forward to every console generation alongside them, so they can get a quick, juicy hit of nostalgic endorphins. I’m a big fan of revisiting games, regardless of whether they were mainstream hits or underrated gems. Having just played through the remasters of Sleeping Dogs and Hitman: Absolution as well Alex Kidd in Miracle World DX, I will always argue in favour of revisiting games – so long as they’re done sincerely and correctly.

I say “correctly” because there are tons of revisited games that simply don’t cut the mustard. They’re haphazardly developed, with barebones features. Quickly shoehorning a game into modern widescreen resolutions doesn’t cut it, and each game requires a different approach to its resurrection. With that in mind, here are some recently re-released games I’ve been playing, with brief reviews and thoughts on each.

The Blizzard Arcade Collection sat on my wishlist for quite some time. A union of 3 glorious 16-bit era Blizzard titles, it offers players a chance to discover classic games that truly projected Blizzard into the mainstream consciousness.

Growing up, I had owned all 3 of these games at one point or another. I wasn’t too into The Lost Vikings, as it required more patience than I was willing to dedicate to it. Blackthorne felt like a gritty comic book series like Judge Dredd mixed with The Prince of Persia and Flashback (it also felt like Blizzard based the protagonist on Glenn Danzig) and I lived (and still live) for Rock n’ Roll Racing, a combat racing game with an iconic soundtrack of classic metal and hard rock, as well as actual commentary!

The Blizzard Arcade Collection gives each title the respect they deserve, with multiple versions of games on offer, as well as some extra features, such as music players, artwork, behind-the-scenes features, and more.

It simply cannot be overstated just how much of a must-have The Blizzard Arcade Collection is for fans of the games it contains, as well as retro gamers. If you want to experience the same versions of those games you played all those years ago (be they Sega Genesis or Super Nintendo) you can. If you’re curious about what the experience was like on the other 16-bit juggernaut, you can do that too.

The Blizzard Arcade Collection gets my big wet stamp of approval because it doesn’t overdo it in terms of tinkering with these classic titles. There isn’t a complete overhaul of visuals, just added effects where it is beneficial. Rock n’ Roll Racing is in widescreen because it makes the game more playable and enjoyable. The Lost Vikings gets the best features of the SNES and GEN versions because it makes total sense. Blackthorne is made just that little bit more forgiving by adding auto-mapping. It goes without saying: there’s no better time than to jump into Blizzard’s early iconic titles.

Alex Kidd in Miracle World was pretty darn good the first time round, with the game remaining popular among retro gamers, complete with its own competitive speed-running scene. The game’s long-running popularity scored it a complete remake from Jankenteam and Merge Games.

Now in glorious widescreen and with loads more pixels, Alex Kidd in Miracle World has never looked better. The soundtrack is on point too, adding loads of more elements, while keeping the original game’s wholesome charm.

Make no mistake, Miracle World still offers a challenge, though thankfully there are difficulty options to cater to everyone. If you want it just as difficult as it was in ’86, you can play it with limited lives and no continues. If like me, you want to be able to finish it, you can also play with continues, or even unlimited lives.

The game’s unique mix of platforming, janken AKA rock, paper, scissors, vehicles and the odd puzzle made it unique in the 80s, and funnily enough, compared to modern games, it’s just as unique now.

Depending on the difficulty you play it on, Miracle World DX might be a short journey, but it’s an enjoyable one, nonetheless.

Throughout the years, Capcom have re-released their classic arcade games regularly. It seems as though almost every console cycle saw people able to replay Street Fighter II, Ghosts n’ Goblins, 1942 and more – as they should.

Released earlier this year, Capcom Arcade Stadium bundles up a bunch of your favourite arcade hits with a plethora of bonuses and customisation options for both your personal arcade, as well as your experience with each game. There are also a number of limited-time challenges to compete in, complete with online leaderboards.

If, like me, you spent your hard-earned (or not-earned) pocket money at the arcades when they were the undisputed kings of the video game world, you’ll find a number of iconic Capcom titles to fall in love with all over again. With the ability to add credits to games on the fly I was finally able to beat Chiki Chiki Boys (a feat I couldn’t even muster when I owned it on the Sega Genesis!)

You have to buy all of the games, or buy packs of games (there’s no option to buy individual games) which is why you’ll find the game having been review-bombed on Steam. When it comes to features, exciting games to play and rewards for dedicated players, though, Capcom Arcade Stadium proves tough to beat.

United Front Games’ closure still stings to this day. We never got a sequel to the criminally-underrated Sleeping Dogs, and Smash n’ Grab and the online spin-off Triad Wars also met with an unfortunate demise.

Thankfully, we can always play the definitive edition of Sleeping Dogs, though aside from including all the game’s post-launch DLC, the Definitive Edition is a barebones HD port, like the Ninja Gaiden: Master Collection. The difference here is that Sleeping Dogs holds up remarkably well, with its high-octane kung-fu cop action, and gripping plot surrounding an undercover cop being torn between his duty and his new triad family.

While the game never felt quite finished, it is still a fantastic open-world game, with some gameplay mechanics that outshine the open-world juggernaut that is Grand Theft Auto V. I cannot overstate this: Sleeping Dogs is a must-play game, especially for fans of the genre. Lucky for us, the game is frequently on sale, and is currently available for $4 on Steam!

When it first released, the Hitman HD Enhanced Collection was showered with complaints. Yet again, gamers want more from their re-releases than quick HD coats of paint. Having recently played through Hitman: Absolution again, however, I’m unsure as to what fans were expecting. Both games are well worth playing if you’re a fan of the Hitman games, and I highly recommend doing so if you’re after a quick 47 fix.

There are times, though, where the slapped-on filters assault the player with beams of light, bloom, and more. Not a good look for a game starring a bloke with a shiny bald head. Still, Absolution is a fun experiment with the Hitman formula that offers a more story-driven (but linear) experience. While it wasn’t a homerun with series fans at its launch, it’s definitely worth picking up in a sale.

Ghostbusters The  Video Game was a terrific game on the PS3 and 360, and it’s a fantastic game now, perhaps even moreso as it escapes the absolute bollocks that are present in games in 2021. There are no microtransactions here, no in-game cosmetics with or without a season pass, it’s just straight-up bustin’, which always makes me feel good.

My only real gripe with GBtG, is that the overpowered ragdolls are still present. A minor hit will make your character stagger slightly, but anything over that will see you careen over, like a fainting goat, only slower. Aside from that, there are reasons why Ghostbusters fans call this game their Ghostbusters 3. It’s based on an unused script from Harold Ramis and Dan Aykroyd, and it features the voice talents of Bill Murray, Dan Aykroyd, Harold Ramis, Ernie Hudson, William Atherton, and Annie Potts.

The multiplayer portion of the game is missing from the remaster, which is a shame, but in no way a dealbreaker. Perhaps that’s why Saber Interactive refused to do any interviews around the time of the game’s launch. In any case, if you are a Ghostbusters fan, this is a must-play game!

I didn’t hear too much about Ninja Gaiden: Master Collection before its release, and there’s probably a good reason for that. As long overdue as we are for more adventures from Ryu Hayabusa, we would have settled for a remake or remaster. We didn’t even get that. Instead, we got a bare bones port of the Ninja Gaiden trilogy from previous console generations.

While there is a lot to love about the Ninja Gaiden games, there is also a lot that could (and should) have been improved. The camera system is particularly dreadful, always managing to take the focus off the action during a fight in a less-than-open space. The combat is already difficult in the NG games without the camera deciding to join the evil Vigoor Empire. Also, it pains me to say it, but the fancy shmancy bloom and other filters look goddam awful at times. I’ve seen these slapped on other remasters like Hitman: Absolution, but they are really distracting here.

Combine the existing faults that haven’t been improved, and poorly censor that gore in Ninja Gaiden 2, and you’re giving gamers less than what they got the first time around! Also, press F to pay respects, the boob controls easter egg is also goneski.

Okay, so you’ve pretty much just got the Ninja Gaiden trilogy with neutered violence, no jiggly bits, a camera that hates you and out of control bloom effects, so is the gameplay and story underneath it all worth playing all over again? It’s hard to say, a lot of similar action games have come out since the NG games wowed us all those years ago. I’m having fun playing Ninja Gaiden 1 and 2 again, but I really don’t want to encourage this kind of lazy porting.

That’s it for this entry in re-releases, remasters and remakes. I’m always revisiting classic games so I’ll be sure to write up more as I play them. What are some of your favourite games that have come back? Let me know in the comments!